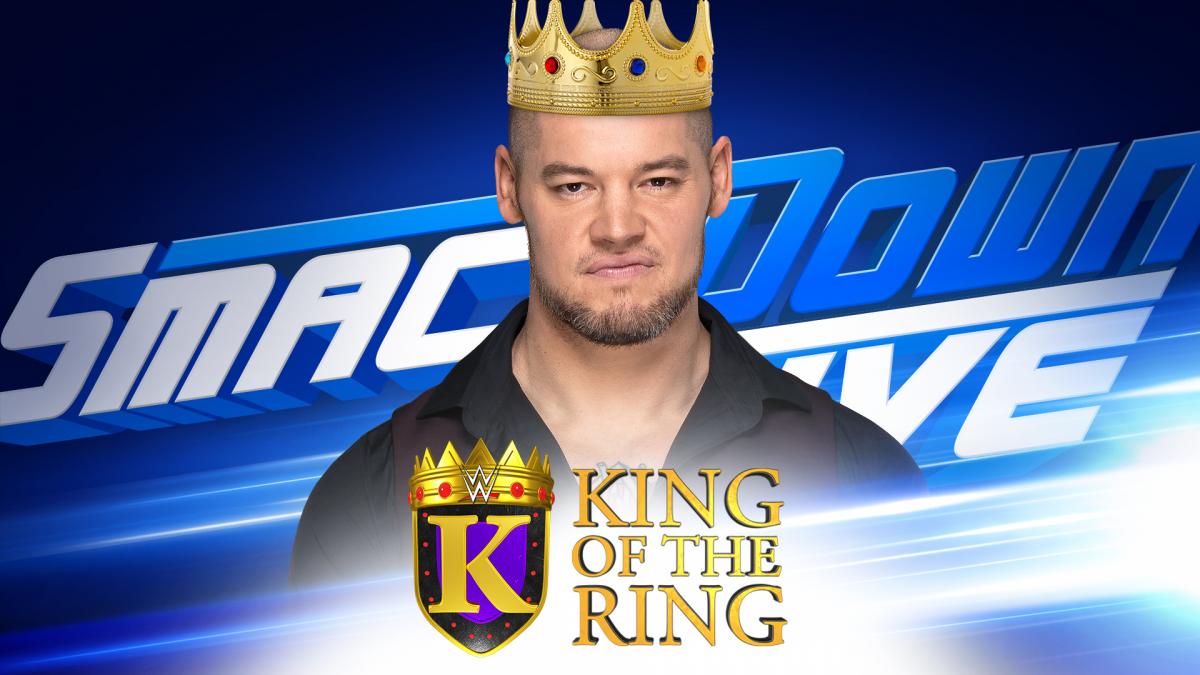 The New Day vs. Randy Orton and The Revival is advertised in a six-man tag team match. That means RKO might not be done chasing the WWE Title even after Kofi Kingston’s clean win at Clash Of Champions.

We will have King Corbin’s coronation. This should be a regal affair. Let’s hope they show him the respect he 100% deserves with this segment.

Erick Rowan was able to beat Roman Reigns at Clash Of Champions, but he had some big help with Luke Harper’s return. Let’s see what the next steps in this storyline might be.

Shane McMahon will address the firing of Kevin Owens. We previously reported that Owens is not in Atlanta for SmackDown this week. Let’s see if WWE plans another surprise.

Bayley is still the SmackDown Women’s Champion after beating Charlotte Flair at Clash Of Champions. It appears that The Queen isn’t done with The Hugger just yet.

The New Day vs The Revival & Randy Orton

They went right to the match after a little rundown of what to expect tonight.

The Revival knocked The New Day’s pancakes off the turnbuckle during their entrance. That was a nice touch.

Wilder and Big E started out and they worked their way to the apron where Big E landed a splash. Then Xavier Woods got the tag and he hit a splash for a two count. Dawson took a tag next and he started working on Woods.

Then Orton and Kofi got tagged in. Kofi took control and Woods hit a clothesline followed by Kofi as they worked in tandem against RKO before Big E hit a splash.

Kingston almost hit a Trouble In Paradise, but Orton rolled out of the ring.

They continued and the heels had control of Woods when we came back from commercial. Woods started to fight back against Orton, but RKO hit multiple thumbs to Xavier’s eye to stop him from getting to his corner.

Then Orton continued to work on Woods for a bit with chops and stomps on the knee before tagging Dawson who continued working on Woods’ legs. Wilder took a tag and Xavier tried to hit a DDT, but Dash sent Woods out of the ring before Orton nailed a suplex on the announce table. Then they cut to commercial again.

Finally, Woods tagged Kofi and he went on a roll. He hit an SOS on Orton for a two count, but Dawson broke up the pin. Then Kofi sent Dawson outside. Wilder hit a tornado DDT on Big E on the floor and Kofi kicked Orton to the outside. Then Orton caught Kofi in a draping DDT.

Randy teased an RKO, then he tagged in Dawson and ordered The Revival to set Kofi up for a Super RKO. Big E broke that up and then Xavier Woods nailed an elbow drop across the entire ring. Kofi hit a Trouble In Paradise on Scott Dawson for the win.

Suddenly, Brock Lesnar came out on SmackDown Live. He stood on the entrance ramp and then Kofi sent Woods and Big E out of the ring. Paul Heyman said, “it’s a bad day for The New Day, yes it is.”

Then they set up a title match on the Fox premier on October 4th. Kofi accepted the challenge and then Lesnar nailed an F5.

Sasha Banks and Bayley cut a backstage interview. They don’t seem worried about anyone in their way.

Michael Cole had a sit-down interview with Rowan. He told Cole to ask Harper any questions for him if he had them. Then he said the backstage attacks were just to scare Roman.

Rowan suggested that Cole “lower his tone” and said that he did what he did to change Roman’s perceived dominance that it’s only an illusion. Rowan said he’s been looked over and disrespected. He said people like Cole, Daniel Bryan, and the WWE Universe think he’s just a goon to do other people’s bidding. He’s not a follower, he’s a leader.

He said Daniel Bryan’s big mistake is that they were intellectual equals. Everyone will learn to never disrespect him again.

Sami Zayn came out and he still had his neck brace on. He said he’s in a lot of pain still and demanded respect. Then he brought out Shinsuke Nakamura, the man that he liberated.

Sami talked some trash to Ali after saying he was lucky to beat Nakamura a few weeks ago. They surrounded Ali and then Sami held his legs while Nakamura took advantage and ran him into the post.

Nakamura hit a Kinshasa and that was it… okay, so there was no match. They said there would be.

Kevin Owens came down during Nakamura’s celebration and took a seat in the crowd. Some fans got very lucky seats.

Shane McMahon was shown in his office and then someone handed him paperwork saying “Shane McMahon, you’ve been served.” He read the papers and walked off.

McMahon said that KO handed him the largest wrongful termination lawsuit in history at $25 million. Kevin Owens then brought up how the lawsuit will stand ground. He fined Owens $100,000 for hitting Elias as a referee, but Shane McMahon did the same thing to Owens when he was a referee.

Kevin Owens said he wasn’t being insubordination, he tried to help Shane win the match. He lost the match because he tapped out. Then the crowd started chanting “you tapped out” toward Shane-O.

Then Owens said he’ll hit Shane where it hurts him the most, his wallet and his pride. Owens said he can see it in Shane’s face that he knows he has a case. He also said it’s not just about getting money, but when Owens wins he gets to fire Shane McMahon instead.

Then Kevin Owens left through the crowd.