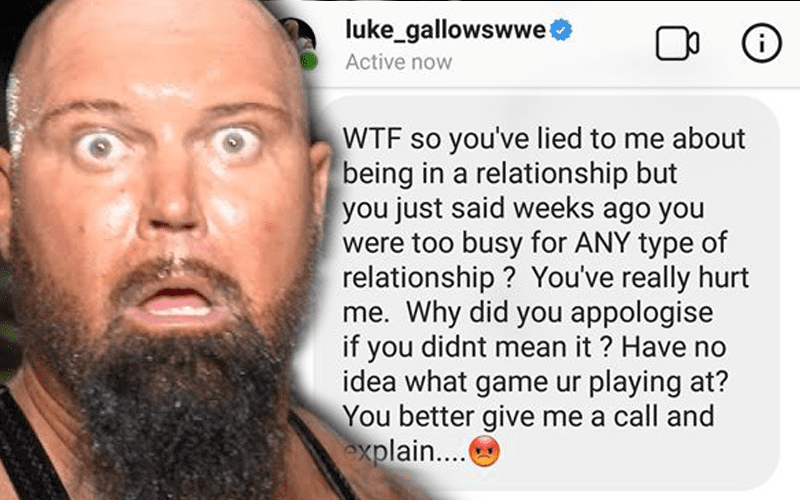 WWE Superstars get a lot of time on the road and sometimes the temptation is just too much to turn down.

One female fan who wishes to remain anonymous reached out to Ringside News with a bit of a troubling story about Luke Gallows.

It should be noted that she wishes to remain anonymous, but we have seen photographic evidence of her Tinder conversations as well as other evidence that they did have close contact with each other.

It is also important to note that this is her side of the story, but it was backed up with evidence she presented.

So we met in February this year and he messaged me. I actually didn’t even sleep with him. So when I went back home to Australia and he kept messaging me I thought he was interested. When I found out he was coming to Singapore we decided to catch up.

He was very flirty and I was sitting on his lap. AJ had told me when we were at dinner that he was showing pics of me so I thought great he’s interested. I slept with him that night and pretty much the next day I only saw him for 2 minutes because I had bumped into him at the mall. I wasn’t happy.

If someone comes sees you from another country you would assume you would make an effort. He got me tickets to the show. I let it go and he did say he wanted to see me again. After he came back from the states I hardly heard from him and I confronted him and he basically said he’s too busy for ANY type of relationship.

He blocked me then a week later unblocked me to say sorry. That was the day the Chasing Glory podcast got got aired.

So I’m watching it and Karl rips into him for being in a single streak and he goes I’m off the single streak. It rang bells in my head so I went on his social media and her Facebook and seen 3 days later after he told me he was too busy to be in a relationship he was in a relationship with her. I did tell her. This is why he got matching tattoos after a month because she actually doesn’t trust him

And you cant tag him in pics anymore because that’s how I found out. I was furious. Pretty embarrassing.

He should of reimburse me for Singapore as he told me to come under false pretenses.

You can check out screenshots that our source provided us as well. These were blacked out only to protect her identity because as she stated to us: ” I don’t want to be blacklisted.”

As you can see from the screenshots that were provided below he messaged her first on Tender. What transpired after that were communications and an eventual meet-up in June. A month later, he told her that he didn’t want a long-distance relationship. Then when it was revealed that he was in a “Facebook official” relationship with another girl, she messaged him about it.

You can also see responses from Gallows’ ex-wife claiming that the story this anonymous girl is telling sounds familiar to her.

When asked about being in a relationship, Gallows indicated that he wasn’t interested in one.

Our reader then called out Gallows for playing her….

Our reader then reached out to Gallow’s ex-wife who had a similar experience with the WWE Superstar.