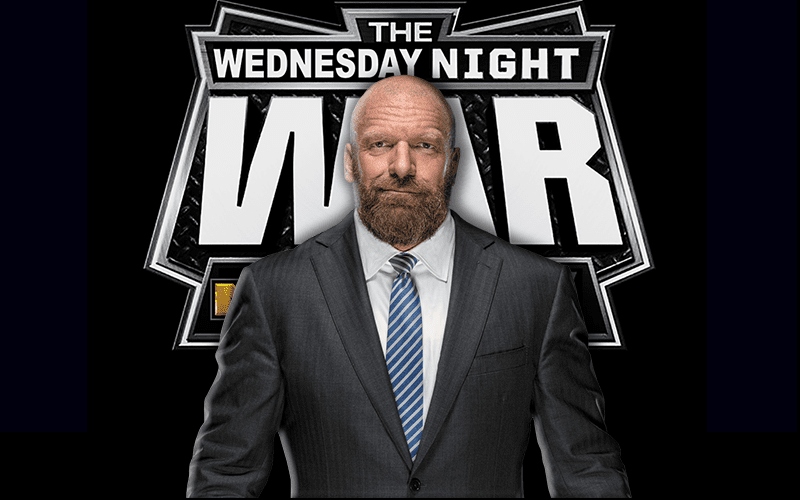 The Wednesday Night Wars are going to be a real thing and it’s on when October 2nd comes around.

Triple H recently appeared on The Pat McAfee show where he brought up AEW vs NXT. This was a very interesting take on things coming from The Game himself.

He said during the Monday Night Wars, everyone was willing to work harder to put out a better product. He said that’s what is always going to work. Triple H said nothing has changed now, but it’s about how they are working harder.

Then McAfee posed a question about AEW coming in and deciding to put their show on Wednesdays, “the same night NXT has been on for five years.” He also brought up how Cody Rhodes destroyed a throne with a sledgehammer at Double Or Nothing.

Triple H replied, however, he didn’t really see it as much of a war.

“You know the war thing gets brought up a lot and competition is great. If they’re coming on Wednesday nights and they’re putting on the best show that they can, great. That’s where we are. We’ve been on Wednesday nights like you said for five years.”

“We were in discussions with various networks about having NXT and growing it. Now’s the right time, so if Wednesday’s the place. Then people can say ‘war’ they can say ‘not war.’ I don’t see it that way, I just see it as putting on the best show possible.”

The ratings will be incredibly interesting to see once they start rolling in after October 2nd. That will be a real telling factor to whether AEW fans are NXT fans or fans of The Elite are coming from a place that has nothing to do with WWE’s already established base of fans.

Things are likely to get much more interesting before they calm down at all. Keep checking back with Ringside News and we will continue to keep you updated every step of the way.