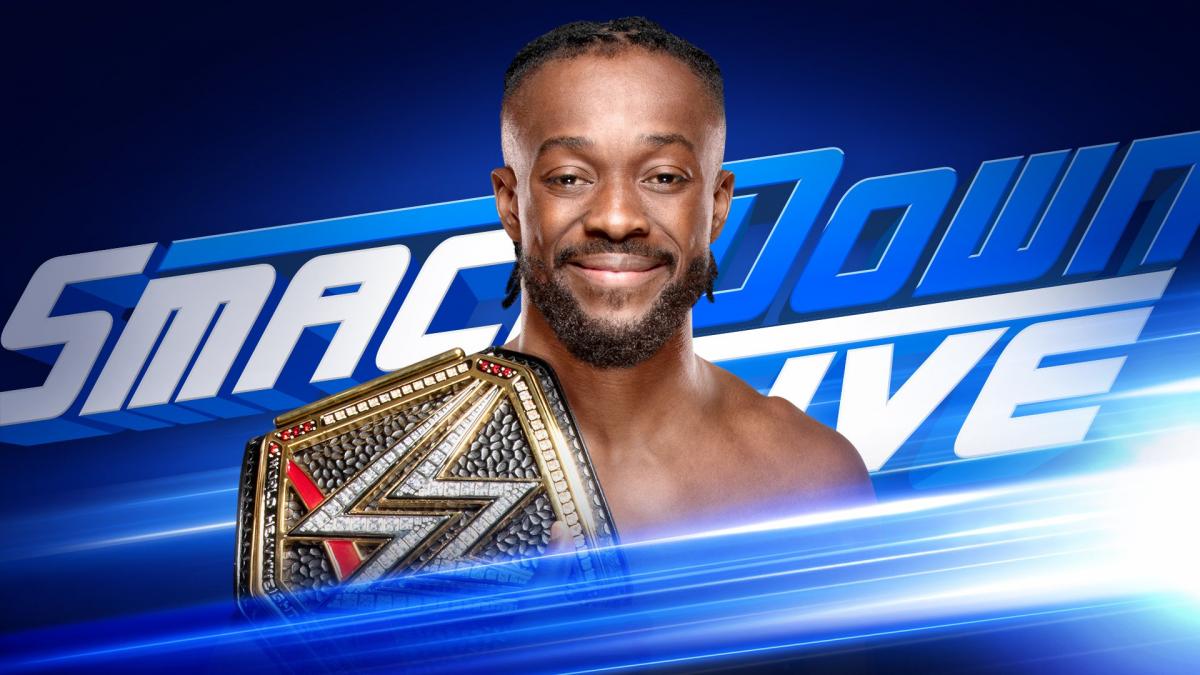 Kofi Kingston has Randy Orton to deal with at Summerslam if he wants to keep his WWE Championship. He will likely do his best to squash his history with the Apex Predator before this Sunday.

Kevin Owens is looking to get a piece of Shane McMahon before their scheduled Summerslam battle. Let’s just see if he can get his hands on him as he hosts another episode of The Kevin Owens Show.

Aleister Black will also have to answer to Sami Zayn’s Summerslam challenge. Our guess is he’s willing to fight anyone who wants to pick a fight with him.

Roman Reigns will also be looking for the man (Daniel Bryan) who is trying to kill him.

Charlotte Flair is facing Trish Stratus at Summerslam and she didn’t really get much Stratusfaction last night, but there’s always SmackDown Live.

Charlotte Flair comes out in full gear with a robe and everything. She looked just as confident as ever. They were really working The Queen Of All Eras gimmick on commentary.

Flair said most strive for greatness, but they don’t have what it takes (genetics) to achieve it just like Trish Stratus.

She kept cutting a promo on Trish Stratus and then they played a promo of Charlotte and Trish. Charlotte didn’t look happy about the Stratus package… but it was interesting how Jim Ross’ commentary was prominently on display during that promo.

Then Trish Stratus came out and she said “The Queen isn’t used to getting what she wants” and then Flair said that Trish drove a minivan there. Stratus said she’s been dreaming of one more match and it’s been eating at her. So everything that Flair said was right because “you are the embodiment of everything that I fought for.”

She wants to prove it to herself, her kids, and the fans. Then she quotes Harley Race saying there’s no greater feeling than being under those bright lights.

Then Charlotte welcomed Trish to her nightmare because at Summerslam she’ll make her bow down to The Queen. “Wooooo!”

Then Trish slapped her and they had a stand-off that didn’t get physical before Flair smiles and left.

They played a Goldberg highlight package from last night and then they started playing his music in the arena. People lost their minds when they thought Goldberg was coming out, but when the security guard knocked on the door to “Goldberg’s” dressing room, Dolph Ziggler came out instead. He got tons of heat from the crowd.

So the Show Off had an entrance with Goldberg’s music while doing the mannerisms. It was rather entertaining.

Ziggler blindsided Mysterio during his entrance and Superkicked him after going for his mask.

WWE officials flooded the ringside area and it was made pretty clear as the crowd started booing that this match wasn’t happening. Then Ziggler Superkicked him again.

He got on the microphone and said that he’s ending the legacy of Goldberg at Summerslam. “So I’m not next because this Summerslam is your last.”

Then Ali came running out to take Dolph out with a kick and a suicide dive.

They had a match that literally started as the commercial break did. So, we came back and Ali was just done getting beaten up and he came back with an X Factor.

Dolph fought back and missed Sweet Chin Music before getting rolled up and taking a headbutt and then Ziggler landed one of his own and won with a Superkick.

Kayla Braxton asked how Roman is keeping it together. He said he’s been through so much this year, but he’s always known what was attacking him… now he doesn’t know who’s attacking him or why they’re attacking him. Yeah. Leukemia reference.

He said it’s one thing to be in the ring and another to try and murder him with a car. He said it’s hurt his livelihood and how he protects his family. Then Kayla Braxton asked who is responsible.

Reigns publicly apologized to Samoa Joe because he knows he wasn’t a part of it and he apologized and got light applause.

Then he said he’s getting answers tonight.

They traded holds and Ember ended up in the corner. Nattie was showing some real intensity until Moon kicked her in the jaw.

Then Ember Moon climbed to the top, but Nattie rolled outside and then she got dropped into the barricade.

Then Nattie slapped on the Sharpshooter on the outside until the referee counted them both out. Nattie wouldn’t get off of her and then Bayley ran down for the save.

Bayley checked on Moon afterward to make sure her opponent this Sunday is okay. What a babyface!