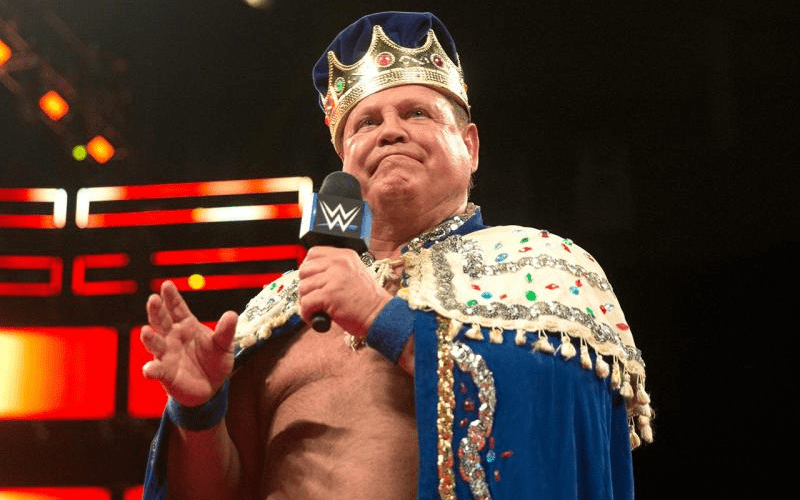 Jerry Lawler was pulled into a terrible situation when his former podcast co-host Glenn Moore scammed fans out of thousands of dollars. One of the victims was a children’s cancer charity.

Now new details are emerging weeks after Jerry Lawler promised to make things right, but it’s not the best update for The King.

Jason Lurie commissioned an art piece that was over $1,000 and he was part of the scam. When the art wasn’t delivered he got an attorney involved. Bodyslam.net reports that Jerry Lawler got Lurie to drop the case, but never followed through with his promise.

Bodyslam has learned that Jason and Jerry had an hour long phone call, clearing the air. Jerry saying he would meet Jason for lunch to discuss what could be done and Jason agreeing to drop his pending lawsuit. The next week Jerry canceled his lunch with Jason.

Bodyslam.net then reached out to other victims of the scam that had been in contact with them. 10 out of 11 of them reportedly replied back saying that they have not heard anything about “making things right” since July 17th.

We have included a few responses that Bodyslam.net has received which you can read below. Or, click here to read them all in the original article.

No contact from Lawler still. During all of this, I have to keep reminding myself that Lawler is an actor. He’s very good at playing the victim role. Should Lawler really have cared about the fans who got victimized, he would have done the right thing in the first place. A paypal refund to each victim would have taken a combined 30 minutes max of effort and everyone could have parted ways. The only reason Lawler cared was because this made the news and cast him in a negative light. Now that it’s off the news, Lawler has forgotten about this once again and he escapes unscathed.

Jerry hasn’t contacted me so far. My statement: I was led to belive I was in a fan community with patreon and fans on twitter, Glenn took advantage of this. Unknowingly the situation he used to pray on me with was something I can relate too. So I was more than happy to help and get something so utterly cool for a fan of Jerry “The King” Lawler’s it in hindsight seemed almost too good to be true. Which it inevitably was. I’m still hurt, disappointed and out of pocket! Still remain a King fan throughout…

He has not contacted me and I have not been reimbursed so still out $225. Just glad it wasn’t as much as others I have seen. I have been a lifelong fan of Jerry Lawler and remember watching him on Saturday morning television from wrestling in the Memphis studio. Been trying to give him the benefit of the doubt and understand it was Glenn Moore that screwed everyone over however it would be nice if he would at least reach out to those that got scammed.

I am out $125 for art that was to have been a birthday gift for my daughter in January and will not get that back because PayPal says it has been past the 6 month period. I was also out $100 for the shirts that Glenn tried to sell to everyone and their granny! I did receive a refund of $50 thru PayPal but the other $50 was thru Cash app and they are useless. I did file report with FBI as well.

Have not heard anything since the July 7th phone call other than a text saying when they return from Cleveland they would fulfill what we talked about over the phone. That was July 17th. Still trying to get reimbursed by PayPal.

As a longtime Jerry Lawler fan, it hurts to think that someone could be so passive about reaching out to fans that were hurt under his banner. Whether he was involved directly or not, the fact remains that this occurred under his brand and promotion, and someone with the amount of non-contracted time (one pre-show a month and a handful of weekend indie bookings) that Jerry has would allow for ample time to redeem himself in the eyes of his fans. Again and again, excuses and words have rang hollow, come and gone with no action, and no remorse is shown after the fact. I signed up for a co-hosting of the podcast, an original color 8×10 drawing, a phone call (the only thing I received), two shirts, a dinner/lunch, and a Cameo message. Time and time again, I was told the drawing was sitting on his desk to be shipped by Glenn, Jerry’s assistant, or Lauren’s father-in-law. I even drove to Memphis once, to a post office less than a mile from Jerry’s house, to locate an item that had shipped but been lost by the mail service, only to find out it wasn’t the drawing I was promised, but a stock autograph instead. I was told the shirts were going to be mailed next Monday. I was mid-drive TWICE (a several hour trip each direction) when I had my lunches canceled because Jerry forgot and did something else on a whim. I was given the most personal, deeply intimate excuses for Jerry’s delayed action in light of his son’s death. I let it all go because of this, as I’m a father as well. I understand Glenn pocketed the money on a lot of this. However, Jerry’s promises to make fans whole again in light of the scam and then making excuses and going dark feels like exactly what happened time and time again through Glenn, and makes me wonder how much Jerry actually was deflecting doing what was paid for and how much he truly cares about his fans. This was an easy fix. I tweeted WMC and Jerry multiple times to attempt to have this fixed quietly. The fact that WMC refused to cover his failed promises of restitution and Jerry hasn’t bothered to get in touch with anyone is absolutely disappointing. I hope the money and fame were worth it, Mr. Lawler. They say to never meet your idols, and I must say, perhaps they’re right.

Jerry Lawler is very busy with a lawsuit of his own. He just filed a suit against the Sheriff’s office responsible for taking care of Brian Christopher before his death.

That $3 million lawsuit definitely has to keep him occupied, but fans are still waiting for their reimbursement or some kind of an attempt to “make things right” from The King after Glenn Moore used his position to scam them.