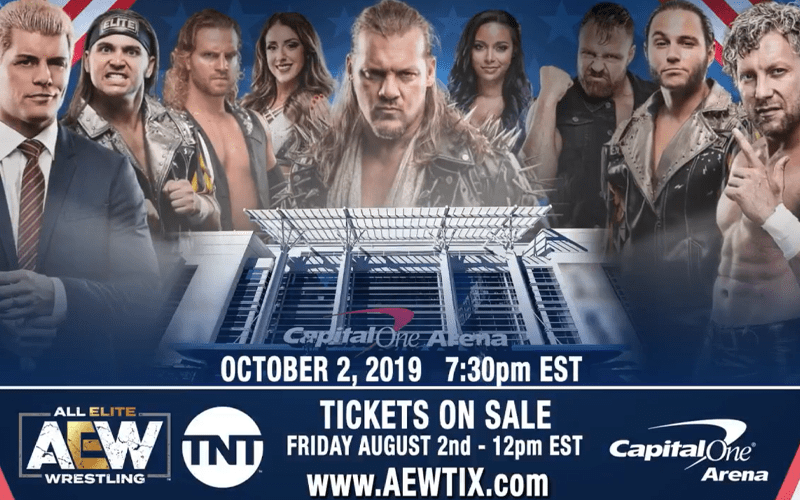 All Elite Wrestling will debut on TNT on October 2nd and tickets go on sale today. Click here for all the information you need to know if you want to get tickets for that historic show.

Cody Rhodes already provided a very brief explanation why AEW picked Washington DC for their first TNT show. However, as he spoke to Chad Dukes on 106.7 The Fan, he revealed that they had a lot of other great reasons for deciding on the Capitol One Arena.

I’ll give you an example. Rafael Morffi, who came from WWE and was there with me as our market rep, that’s the individual who can look all across the board, and who can strategically place us in the best market and service every market that we possibly can, and reflect that data that’s been reflected, and appease that, and all that math and all that science. We’ve built a really great team around us, and short answer, I’m a huge fan of American history. I’m the American frickin’ nightmare. It makes perfect sense that we’re in Washington, D.C., the nation’s capital. So that’s the short answer. The long answer is that we’ve got a lot of really wonderful professional people who said this is the spot you want to be for the first show.”

We will have to wait and see how fast tickets will sell for AEW’s first TNT show. It will be a very interesting situation and we can only hope for the best.

There are a couple of different factors that makes their television show unique such as the day of the week they will take place. It’s not impossible to imagine that they will have a packed arena for their first show before moving to smaller venues from that point on for their weekly television show.