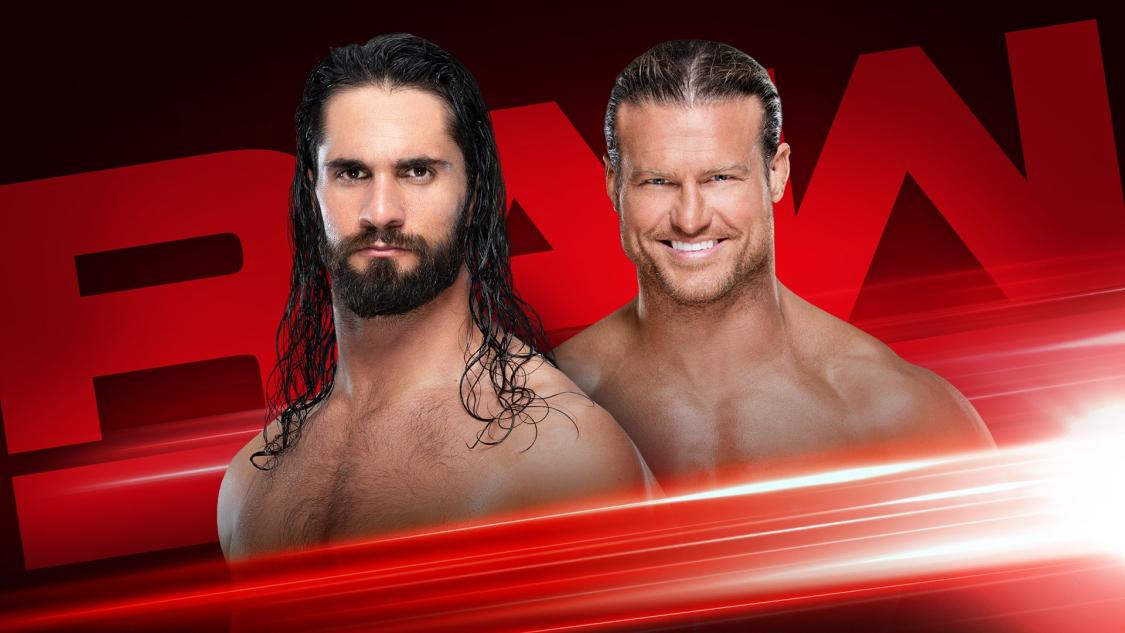 Tonight’s Raw will kick-off with a 24/7 Championship “Mosh Pit Mixed Tag Team Match”. Which means R-Truth and Carmella will face Drake Maverick and his wife, Renee Michelle. It’s unclear what the rules are as of now, but it could be another term for tornado tag.

The Raw Tag Team Championships will be on the line tonight as The Revival defend the silver against The Uso’s and The O.C in a triple threat. This is an exciting match that has the potential to really shake things up ahead of SummerSlam.

Speaking of The O.C, the next challenger to AJ Styles’ United States Championship will be determined in a gauntlet match featuring Ricochet, Cesaro, Rey Mysterio, Sami Zayn, and Andrade. It’s highly unlikely the tale of Styles Vs. Ricochet is over quite yet, so expect the one and only to come out on top.

Elsewhere tonight, Samoa Joe and Roman Reigns take part in a “Samoan Summit”, Alexa Bliss battles Becky Lynch, and Seth Rollins takes on Dolph Ziggler. It’s a stacked card for Raw and it’s not often we know most of the matches ahead of time. If you’d like to talk about tonight’s Raw, download the Ringside News app, follow us on Instagram or Twitter, or just leave a comment. Enjoy the show!

Raw begins with a promo video all about the WWE 24/7 Championship, showing some of the best highlights since the title was introduced.

The prestigious #247Championship is ON THE LINE to kick off Monday Night #Raw LIVE on @USA_Network! pic.twitter.com/L8GPo8LiwF

We go live to the arena and the ring is surrounded by Superstars. Drake Maverick and his wife come down to the ring for this mixed tag match, followed by the current 24/7 Champion, R-Truth, and Carmella come to the ring.

Renee Michelle hits Carmella before the bell even rings, but then the ladies are sent to the aprons. The match gets underway and Maverick attempts to roll-up Truth to no avail.

Truth catches Maverick with a hip toss, followed by a split-leg drop, then a regular leg drop for a two count. Truth dances to taunt Maverick, then flips him over the ropes but he’s caught by Superstars on the outside. They carry Maverick around the ring before setting him on the apron, where Truth flips him into the ring.

Truth’s pinfall attempt is broken-up by Michelle, prompting Carmella to run in and attack her. Maverick and Truth separate them, but then Carmella slaps Maverick. Truth hits him with a facebuster suplex for the win.

After the match is over, all the Superstars that surround the ring climb in and they all get on top of Truth like a dog-pile and the referee counts to three. There’s some confusion but then Mike Kanellis rolls out of the mosh pit and he’s got the title. Mike Kanellis is the WWE 24/7 Champion. Kanellis runs to the back and he’s chased by all the other Superstars, except Truth and Maverick. He locks himself in a room until Maria walks up yelling and tells them to leave, faking stomach problems. She bangs on the door, telling him to let her in. He asks who it is and she says she will knock down the door and kick him in the vagina if he doesn’t let her in. Mike opens the door.

RUN, MIKE, RUN!! @RealMikeBennett has captured the #247Title from @RonKillings and is on the MOVE on #RAW! pic.twitter.com/iIdfBq9ieH

Now however, it’s time for a gauntlet match to determine the number one contender to AJ Styles’ United States Championship. Rey Mysterio is the first man out, meaning Rey will have to defeat four other Superstars if he looks to get the title opportunity. That match, is up next!

The match gets underway and Cesaro slams Rey down, then gator rolls him. Cesaro takes a headlock, Rey shoots him off, then the two exchange waistlocks. Rey looks for a roll-up but Cesaro kicks out. Rey catches Cesaro with another roll-up for a two count, then Cesaro drops Mysterio with a clothesline.

Cesaro takes a headlock and we see the Champion, AJ Styles, watching on a monitor backstage. Mysterio fights out and jumps on Cesaro, who catches Rey on his shoulders, electric-chair style. Rey tries to hurricanrana Cesaro over the ropes and they both tumble to the outside but Cesaro lands on his feet with Rey still on his shoulders! Mysterio knocks Cesaro down, then gets into the ring and hits a sliding splash to Cesaro on the outside.

Mysterio gets Cesaro back inside and hits a springboard hurricanrana onto the ropes. Rey looks for 619 but Cesaro rolls out of the ring. Rey dives out and hurricanrana’s Cesaro over the barricade and into the crowd.

We return to see Cesaro apply a camel clutch to Mysterio. Rey fights out but Cesaro slams him into the turnbuckles. Cesaro sets Rey on the top rope, but Mysterio hits him with a senton, then a hurricanrana into the corner for a two count.

Mysterio looks for a springboard but gets caught in mid-air with an uppercut. Cesaro looks for the Neutraliser but Rey drops down and grabs his legs. Cesaro hits a leg drop, followed by a big boot for a two count. Cesaro lifts Rey up high but Mysterio hurricanrana’s Cesaro into the turnbuckles. Rey climbs the ropes but Cesaro cracks him with a European uppercut.

Cesaro then gets Rey on his shoulders and climbs to the middle rope. Mysterio elbows Cesaro and looks for a hurricanrana from the top rope but Cesaro holds on. Rey then punches him and hits a bulldog from the top! Rey hits the 619 and a frog splash for the win!

Sami Zayn is the second opponent for Mysterio. Before the second match even begins, Zayn runs down and attacks Rey, kicking and punching him against the ropes.

Sami forces the referee to start the match and he instantly looks for the Helluva Kick but Rey dodges it and rolls him up for the win!

Zayn is irate after the finish and referee’s have to hold him back. Rey’s next opponent will be Andrade.

We return to see Rey and Andrade lock-up, with the latter forcing the lucha legend to the corner until the referee forces the break. They lock-up again and Rey takes the back but Andrade elbows him off. Andrade gets a hammerlock but this time Rey elbows his way out.

Andrade chops Rey in the corner, but then Mysterio returns the favour. Andrade looks for a tilt-a-whirl backbreaker but Rey counters into a splash for a two count. Andrade slams Rey into the turnbuckles, then delivers a lariat. Andrade throws Mysterio out of the ring, then attacks him on the outside.

Back inside the ring, Andrade chops the chest but Rey fires back with chops of his own and a kick. Rey looks for a springboard moonsault but Andrade catches him and hits Three Amigo’s. Andrade heads up top and moonsaults, Rey rolls away, but Andrade lands on his feet and hits a standing moonsault for a two count.

Rey hits an enziguiri, then looks for 619 but Andrade catches him and hits a backbreaker. Andrade hits the Hammerlock DDT for the win.

After the bell, Andrade stomps on Rey, then rips his mask off! Ricochet is out next and he runs to the rescue of Mysterio. Ricochet hits Andrade with a springboard clothesline. Andrade regroups with Vega, while Ricochet helps Mysterio.

He’s got ONE MORE opponent to deal with! #RAW #GauntletMatch pic.twitter.com/TgHpKweILt

The fourth and final contest gets underway and the two men lock-up, with Andrade forcing Ricochet to the corner. They lock-up again and Ricochet takes a waistlock. Ricochet ducks and dodges Andrade before hitting a hurricanrana and a dropkick. Andrade rolls from the ring, so Ricochet looks for a dive but Vega grabs his foot.

Andrade tries to make the most of the distraction but Ricochet fights him off. Ricochet gets on the apron and hits an enziguiri to Andrade. Ricochet looks for a springboard but again Vega grabs the foot. Andrade attacks Ricochet, knocking him to the floor.

Ricochet is once again the number one contender to the WWE United States Championship. We see replays of the match, then Kayla Braxton comes into the ring for an interview. Ricochet says when he beat Samoa Joe to become the United States Champion nobody could believe it. But if there’s anything he’s learned in his career, it’s that people only believe what they see. So, at SummerSlam, when he beats AJ Styles, then everyone will believe in him again. And so will he. We see AJ Styles laughing backstage.

Mike and Maria Kanellis are backstage and he’s so proud of himself. He says he won the title for them and now she can be proud of him. Maria tells him to get onto his back, like he usually does. She says she wants to pin him so that their unborn child has a real Champion for a parent. Mike reluctantly lies down and Maria puts a foot on his chest. Maria Kanellis is the 24/7 Champion. Maria is the first-ever pregnant Champion in WWE and she walks down the hallway yelling it. Other Superstars are watching and she goads them to attack her. She says, this week, she will be at her OBGYM appointment, so someone could pin her during it.

After the break, we’re getting A Moment of Bliss, with allegedly shocking footage.