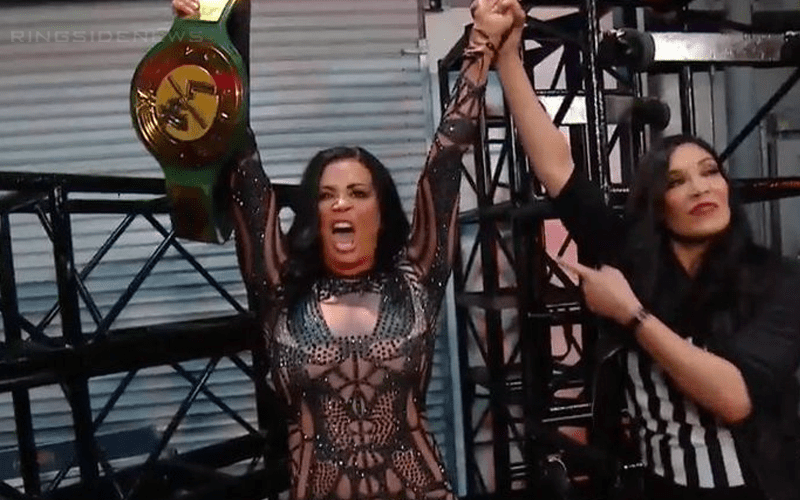 The WWE 24/7 Title was a recurring segment during the Raw Reunion special. Let’s just say it got passed around more times than a bowl at RVD’s house.

R-Truth was the WWE 24/7 Champion walking into the show, but it was short-lived. Drake Maverick rolled R-Truth up when he and Carmella were arguing with Renee Michelle. Apparently, she provided a perfect distraction.

Later on, Maverick was trying to hide in the locker room and suddenly, he encountered a bunch of worms and then the Boogeyman was there. He scared Drake so much that he fell down so Pat Patterson kicked him a few times and got a foot on Drake for the three count.

We didn’t see the next title change, but Gerald Briscoe had the title. Then Kelly Kelly kneed him in the crotch and pinned him to become WWE 24/7 Champion.

Later on, Kelly Kelly was talking to Candice Michelle and Melina who revealed that she’s now a referee. So Candice knocked Kelly Kelly out and pinned her to become the new champion. Suddenly, Alundra Blayze came up from behind her and won with a sleeper hold.

Before Blayze left with the title, she said something about not being champion for very long.

Alundra walked out to the announce table later on and pulled out a trash can. Obviously, she was going to reenact her famous segment where she threw the WWE Women’s Title in the garbage live on Nitro.

Just before she could drop the title in the trash, Ted DiBiase came out and offered to buy the title before she threw it in the trash. Ted pulled out a wad of cash and bought the title. So that’s one way to win a title.

Later on, The Million Dollar Man was laughing and walking backstage with his new title and he got in his limo. There were some knocking noises and then Drake Maverick emerged from the front of the limo with the WWE 24/7 Title.

Renee Michelle ran up and was happy that they can finally consummate their marriage. Suddenly, a group of people who weren’t booked to do anything else on the show chased Drake Maverick away.

The crowd chased Maverick all around the ring while Mick Foley was trying to cut a promo. This was just before Bray Wyatt showed up and destroyed Foley with his own finishing move.

Maverick got away and was just about to get in the limo to head off with his wife to consummate their marriage. Then R-Truth ran up and pinned Drake Maverick. Truth got in the limo with Drake’s wife and headed off after that. Drake was very upset about losing his title… and of course, his wife too.

So the title still belongs to R-Truth, but it really went through a ton of changes during the Raw Reunion.