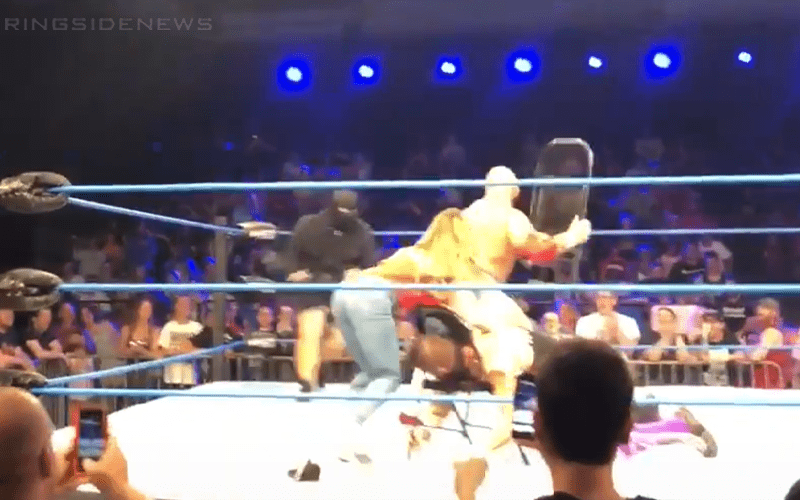 Usually pro wrestling companies discourage people from snapping too many pictures let alone taking video recordings during their television tapings. However, it seems like Impact Wrestling just lifted the ban in a big way.

Rhyno appeared at Slammiversary while under a ski mask. Then he showed up at last night’s television tapings to deliver a gore without anything hiding his identity.

It was a pretty bold move to appear at Slammiversary while still under WWE contract, but maybe that wasn’t him after all? Because the Rhyno who showed up on Impact was a decoy as the real one later came out of the crowd.

Michael Elgin was getting ready to destroy Brian Cage while his head was wedged in a chair. Cage’s wife Melissa Santos is obviously getting more involved in the storyline because she was begging for Elgin not to do it. Then a masked man jumped in the ring that everyone thought was Rhyno. After Elgin put the masked man down with a chair shot, the real Rhyno appeared to deliver a massive Gore.

All of this was revealed by Impact Wrestling when they uploaded a fan video from the crowd showing everything surrounding Rhyno’s big return.

This cements Rhyno’s return to Impact Wrestling, but the most interesting part is Impact Wrestling spoiling their television taping. To each their own, but it might have been a big surprise for their viewers.

This also might signify Impact Wrestling’s need for attention. Because they have an incredibly talented roster of talent that nobody seems to be watching right now.