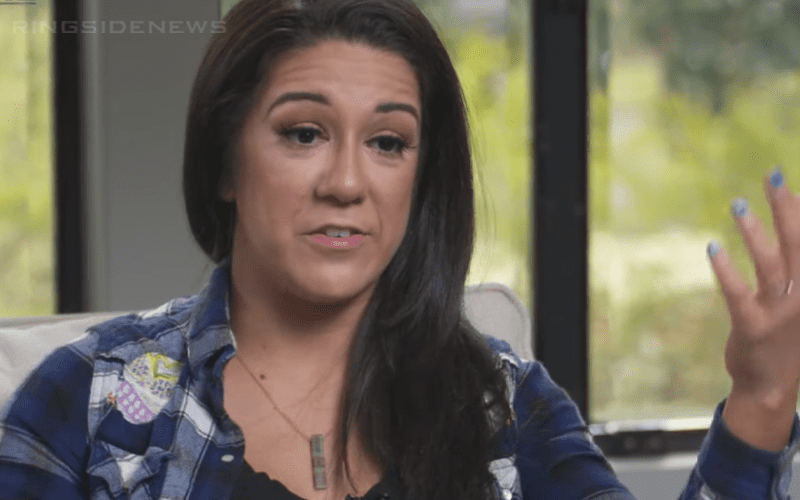 Bayley is the SmackDown Women’s Champion, but Alexa Bliss and Nikki Cross are looking to change that at Extreme Rules this Sunday. They might very well be capable of taking Bayley’s title, but they won’t be able to strip her of that unique name.

While speaking to Fair Game, Bayley was asked why she picked her specific name for WWE and why it had to be gender neutral. Her answer was very personal as it turns out that her name reflects who she is even down to how it is spelled.

“We were always one big thing, but I was such a tomboy, but accepted by both like I’d play sports with the boys, but then I’d have sleepovers with my girlfriends or everything.”

“So when I came around to trying to pick a name little boys could be like ‘oh that’s my name’ or little girls could be like ‘oh, that’s my name!’ Whatever it was and that’s really where it first came from and they I specifically had it changed to B-A-Y because I’m from the bay area. So Bailey with a B-A-I, I’m sorry… it’s a little personal.”

Bayley is reportedly doing very well with younger fans, specifically in the younger female demographic. Therefore, this name choice has paid off for The Hugger. She has made that one-word name really work for her as well.

WWE owns the name “Bayley” so if she ever does leave the company, odds are she will go back to being Davina Rose which doesn’t have quite the same pop to it. Then again, people might have thought the same thing about Jon Moxley. It doesn’t seem like Bayley is looking to leave anytime soon because she is a champion and living out her fangirl dream as a WWE Superstar.