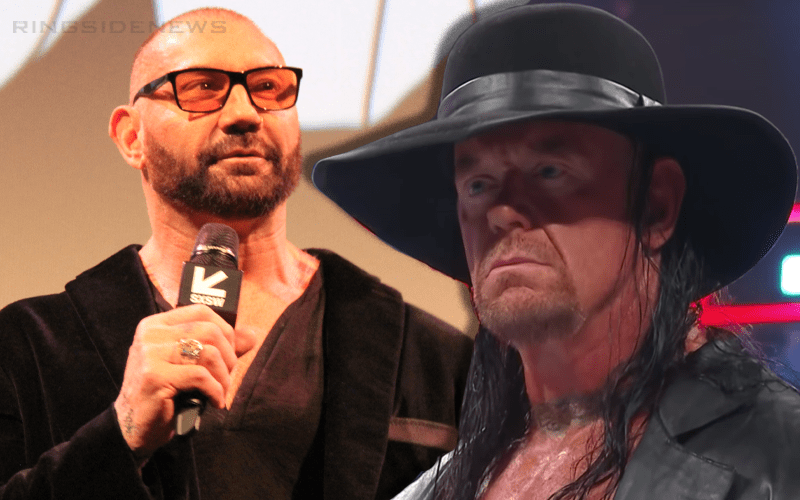 The Undertaker vs Goldberg is a dream match that should have happened a decade ago at least, but it took place in 2019 during a Saudi Arabian event. The reception wasn’t good at all and it was critically panned by a lot of people including Matt Riddle who was by far the most vocal Superstar to come down on the match.

While speaking with GQ, Batista admitted that he tried to call The Undertaker before the match to change his mind. Of course, it didn’t work because Taker was pretty steadfast that the match was going to happen.

I called, man. I called ‘Taker and said, “Is there any way I could change your mind?” He laughed, and I knew I couldn’t change his mind. He said ‘it sounded good when we first started talking about it.'”

“I only saw highlights which were, you know, low lights. it was not good. It’s just bad circumstances all the way around. I feel like Taker’s there for the right reasons. I think he’s there because he still loves it. But I wish that they would utilize him in the right way. I think a novelty match with Goldberg is the wrong way. I just don’t think it’s good for anybody and especially it’s not good for the fans.”

WWE really didn’t do The Undertaker any favors with their booking at WWE Super ShowDown. Perhaps he will be able to redeem himself when he tags with Roman Reigns at Extreme Rules.

If anything, a lot of our questions were answered about what would happen if The Undertaker and Goldberg ever meet in the ring. Because we saw what happened and most fans might like to forget it.