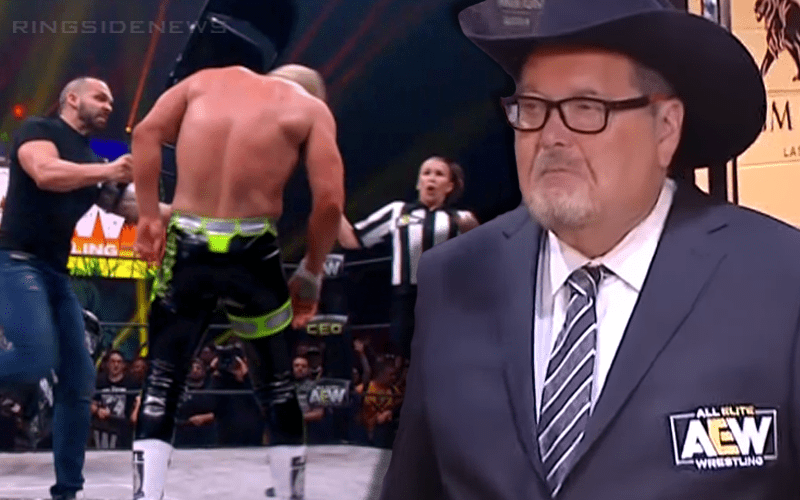 AEW Fyter Fest featured a rather controversial spot where Shawn Spears got in the ring and whacked Cody Rhodes in the head with a chair. This chair bent and cut Cody open even though it was “gimmicked.” The spot soon brought a lot of criticism to the young promotion.

While speaking to Busted Open Radio, Jim Ross opened up about the use of chair shots in WWE. He doesn’t see any need for them anymore and would like to see them become a thing of the past.

“I think the chairs have run their course to be honest with you. The chair shot back in the day, the chairs were there as usable objects because we are sitting on them. The ringside fans and the studio audience were sitting on them. Those steel chairs and folding chairs were everywhere because they were handy, easy to stack, cheap, easy & inexpensive staging. Now, then nobody sits on a steel metal folding chair. They’re all locked up on ringside. Usually nicer chairs. And the announcers don’t sit on folding chairs. Maybe the timekeeper does, I don’t know.”

“It’s a work that it’s such an expose. Another thing, the boys know, if they’re gonna use the chair they gotta assume the doggy-style position. They’re on all fours waiting to get hit in the back. And I can’t recall ever in the last many years that a chair shot to the back has beaten a single soul.”

“So, why are we doing it? I’m not bitching about our creative. It was edgy. It was out there. In hindsight I wouldn’t have done it. But it happened and we [the announcers] called it the best we could. But I think the chairs are kinda like the authority figures – I think they’ve kinda run their course. Unless somebody can figure out a way to make them more innovative and current, I’d say lets ‘table that stuff’. No pun intended Bubba [Dudley]. Let’s get rid of those chairs for a while.”

Maybe it is a good idea to not use chairs as weapons anymore. Because too many injuries are happening with this old standard in pro wrestling violence. We’re not likely to see pro wrestlers stop going for a folding chair when they’re in a pinch, but perhaps they need to investigate another weapon that can still have the same effect without all of the long term damage.