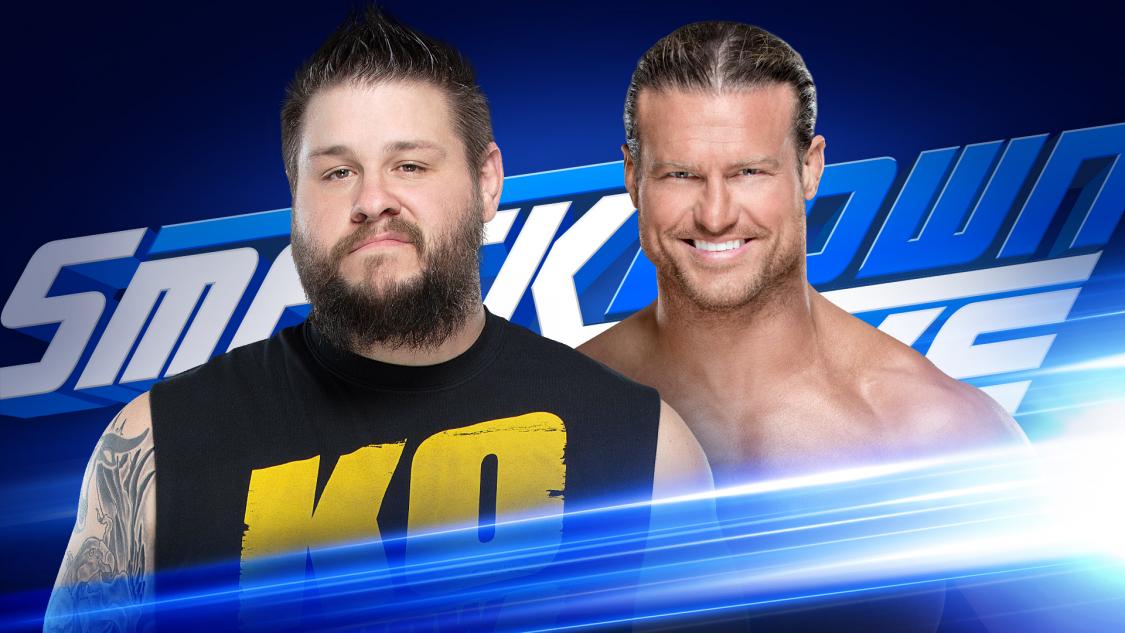 Welcome to Ringside News’ SmackDown Live results. This will be a big show and as a great man once said only time will tell what will happen tonight! This is going to be fun and it all starts at 8:00 PM EST. So check back then and we’ll get going as the show kicks off.

This is the final SmackDown Live before Extreme Rules and WWE is going to cram as much as they can in the final episode before Eric Bischoff supposedly starts his new job as Executive Director.

Kevin Owens is slated to wrestle Dolph Ziggler on tonight’s show. After KO turned babyface by beating down the Show Off last week this seems like a logical place to go.

We are also going to supposedly find out who will wrestle Aleister Black at Extreme Rules as well. Black has been begging Superstars to pick a fight with him for weeks and last week someone knocked on his door. Wonder who dunnit?

We will also have a SmackDown Tag Team Summit this week on the show. Daniel Bryan and Rowan are expected to have some kind of a segment with Heavy Machinery and New Day as the three teams will be battling this Sunday at Extreme Rules.

All that and more is expected tonight as SmackDown Live prepares for Extreme Rules. Check back at 8:00 PM EST and we’ll kick things off when the show starts.

Dolph Ziggler was shown showing up and Kayla asked him about his former partner Kevin Owens. Ziggler called KO a “tub of excuses” and then Owens drove up honking his horn and they fought about him interrupting Ziggler’s interview.

Then Owens hit Dolph and they brawled. Luckily, there were some Superstar around to help break them up. Shane McMahon showed up and helped separate them too.

McMahon told Ziggler to get inside and kicked Owens out. It looked like KO’s lip was busted.

Shane was interviewed about this brawl and he was asked about why he cancelled the main event. He said he has a few ideas about what he’ll make the main event now.

Kevin Owens cut the intro of the show off and he jumped the barricade with a live mic. He said he’s tired of towing the company line. Then he called out the McMahon Family for their fake promise that they made when they said things were going to change.

He said nobody wants to see Shane McMahon and he has way too much power. McMahon came out and said to cut KO’s mic which they did.

Then Owens got the time keeper’s mic. He said there’s more than one microphone and called Shane an idiot. He said having McMahon on the show was a mockery for WWE Superstars.

KO started saying that Shane takes up TV time from Apollo Crews, Buddy Murphy, Asuka, Kairi Sane, and then he got ran off by security.

Nakamura took control of this match from the jump and they went to commercial as he as he was stomping Finn down in the corner.

Finn tried to fight back, but Shinsuke continued to beat him down and stop every attempt for a comeback throughout the commercial break.

Balor blocked a kick and then he came back with an elbow across the throat. Nakamura blocked a slingblade and kicked him in the back of the neck before hanging Balor off the ropes and hitting a sliding German suplex.

Balor stopped a Kinshasa and hit a slingblade. Nakamura got up and drove a knee into Balor before moving to the apron where Shinsuke hit a flying knee to the side of the head.

Nakamura sent Balor into the barricade and the ring post before moving back inside. Then then went to the floor again where Nakamura hit a Kinshasa leaving Balor outside the ring. Finn got in right before the 10 count and Nakamura knocked him back outside where he sent Balor into the barricade and into the steps. Shinsuke kept beating Balor down, but he still beat the count. Then Nakamura nailed another Kinshasa and won the match.

Shane and Drew were backstage about how much better they are and how prepared they are for Extreme Rules. Elias said he has the perfect funeral song prepared. McMahon said it needs to be spooky.

Dolph Ziggler walked up and demanded a match. So they gave him one with Roman Reigns. The heels will be out there too.

Samoa Joe cut a promo in a darkened room backstage. He talked about offering Kofi safety, but he didn’t take it.

Nikki Cross is representing herself and Alexa Bliss. So she apparently got Bliss’ power of attorney so she can sign for her.

Bayley told Nikki Cross not to worry because she was only out to sign a contract. She spoke about learning that people are going to stab her in the back and only use her for things. She said that Bliss has Cross doing her dirty work every night. Nikki said Bliss knows she can handle herself.

Then Bayley asked her if she’s really okay with helping someone else win a title. Then Bayley said she’s bringing everything she has. Then she said Alexa Bliss is going to lose and blame her.

Nikki Cross said she wants to help her friend. She said Bayley wouldn’t understand that because all of her friends abandoned her. Then Nikki said that her and Bliss are going to become “the first-ever SmackDown Women’s Champions Co-Champions.”

Nikki invited Bayley to stick around for her match against Carmella.

Nikki started things out very quickly by taking some frantic offense to Carmella. She took down Mella and hit a dropkick before hammering her head into the mat a few times.

Cross hit Mella in the back and hit a suplex for a two count before applying a submission hold. Carmella slapped Nikki and then took some punches before Mella ducked under a crossbody and then she hit a clothesline and put Nikki’s face into her boot in the corner.

Mella did a moonwalk and hit a Bronco Buster. Then Cross hit a spinning breaker for the win.

The IIconics were backstage and the Kabuki Warriors were there. Paige said they are going to take their WWE Women’s Tag Team Title match tonight.

Peyton said Billie is sick and Paige said they just make excuses and they’re just clowns. Then Paige slapped Billie Kay before reminding her that she’s sick. Then she said the match is coming.

Roman Reigns said that he and The Undertaker are gonna do their thing at Extreme Rules. Drew and Shane are going to rest in peace.

They botches The New Day’s music and started playing before Big E could do the intro. Then it stopped and he did the intro.