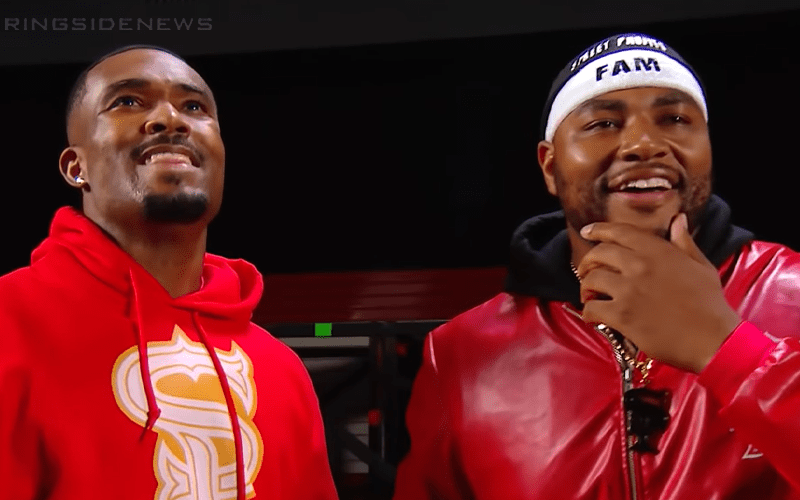 The Street Profits debuted on WWE RAW last week as NXT Tag Team Champions. This was a very interesting move and it was a Paul Heyman decision.

Montez Ford and Angelo Dawkins cut a backstage promo this week on RAW about Extreme Rules. They might not have a match, but that didn’t stop them from hyping The Undertaker & Roman Reigns vs Shane McMahon & Drew McIntyre’s battle this Sunday.

Mike Johnson said on PW Insider Elite audio that WWE actually let the Street Profits cut their backstage promo during RAW live. They wanted to capture the moment and let The Street Profits’ energy shine. This is exactly what happened.

“We had the Street Profits backstage and they got all excited because they realized they were on camera. They did some kind of Flavor Flav hypeman deal talking about Roman Reigns, The Undertaker and Shane McMahon and Drew McIntyre at Extreme Rules.”

“Roman’s gotta make it through RAW to get to Sunday, they were extremely entertaining. I was told that they actually did the Street Profits stuff live. They didn’t want it to be canned, they wanted it to be electric and live in the moment and that was a decision that was made.”

When a segment is live, then it’s live, pal. There are no retakes and options to tweak a line and come at something with a different energy. Things can get real when they’re live and that’s what WWE wanted The Street Profits to bring.

It was a pretty successful segment too and had a lot of people very impressed with how they pulled it off even when fans assumed it was pre-taped like most other segments on the show.