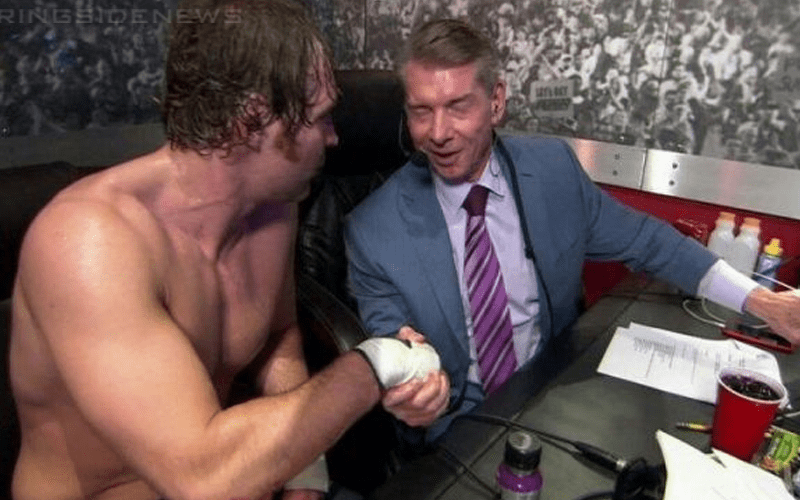 Jon Moxley dropped the Dean Ambrose name when leaving WWE for the rest of the pro wrestling world. However, there was a time when he was very close with Vince McMahon as an exclusive independent contractor for WWE.

While speaking to the Store Horsemen podcast, Moxley revealed that he was intimidated during his first meeting with Vince McMahon. However, he was told that in order to make it in WWE you must develop a relationship with The Chairman. This is something he definitely sought out to do which was likely very beneficial to his career as a WWE Superstar.

However, even though he was following some very good advice, Moxley revealed that one of the primary reasons he developed a relationship with McMahon was because he got tired of the runaround backstage. Because he would be told that he needed to wait for McMahon’s approval on a constant basis. Therefore, he cut out the middleman and went straight to The Chairman.

“Mostly [I built the relationship] because I eventually just got sick of waiting for answers. Because it’ll be like, ‘Okay, what are we doing tonight?’ ‘Well, we don’t know yet, we’ve gotta wait for approval,’ this or that, there’s a producer and this guy, there’s like — there’s four levels that you have to go through before you get an answer. And Vince is busy doing all this other stuff. If you’re not the most important thing, you might be waiting around like, ‘What are we doing? Are we doing Option A or B? I don’t care. I want Option C. What are we doing?’ ‘We don’t know.’ I’d be like, ‘I’m just going to Vince. Screw it.’ And you just knock on his door, walk in. And it’s actually, he loves when people just come in and talk to him.”

“Because a lot of people are too intimidated to go talk to him. And so I just started a relationship with him because I was just like, sick of waiting around, going like, ‘What are we doing?’ I just wanted to cut through the red tape. So would just be like, ‘I’m just gonna go ask Vince.’ And it was like, ‘Yo, what are we doing? Option A or B? Or check it out, C? No, you hate that? What about B? No? A, really? Okay.’ Well alright, at least I know we’re doing Option A, and now I can work on it. And then I come back out and say, ‘Vince said we’re doing this.’ Everybody goes ‘Oh, okay.’ I’m like, ‘Yeah, I just went and asked him.’ We’re sitting around waiting, you know what I mean? So that’s how I started having a relationship with him.”

Moxley doesn’t have to worry about all of the chain of command anymore in AEW or even NJPW. Because he is free to do as he wants in the ring to tell his own stories. He also has a clause in his contract that says he can leave after a year if he doesn’t like AEW so that has to be comforting as well.

WWE would definitely love to have Moxley back in the fold, but it doesn’t seem like he’s too eager to give them another chance.