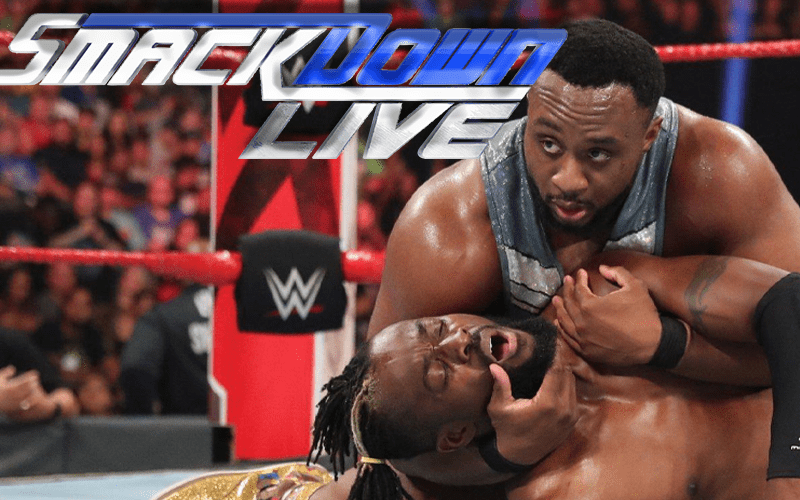 Welcome to Ringside News‘ results for WWE SmackDown Live. We’ll start when everything kicks off at 8:00 PM EST. Keep refreshing after that and we’ll bring you all of the action as it happens.

WWE RAW showed some real improvements last night. Not all of the ideas were Paul Heyman’s but he certainly had his fingerprints on some things. Let’s see what Eric Bischoff might be able to bring to the table as he starts his new Executive Director job with the blue brand.

Daniel Bryan and Big E are slated to wrestle tonight. An Extreme Rules match has already been announced for the SmackDown Tag Team Titles between The New Day and The Planet’s Champions. That should be a good match.

Samoa Joe will also likely continue harassing and hunting down Kofi Kingston as they prepare for their Extreme Rules battle. That match might be the best one of the night when July 14th rolls around.

Sonya Deville and Mandy Rose seem to be tormenting Ember Moon and The Warrior Goddess might have had enough of their harassment. Let’s see how it escalates this week on WWE’s blue brand.

Bayley and Alexa Bliss’ rivalry will likely continue as well. Nikki Cross won a SmackDown Women’s Title match for Bliss last week on the show so that program gets to continue at Extreme Rules.

All that and more is expected as SmackDown Live starts at 8:00 PM EST.

Before they kicked off the show, they took a moment to recap everyone about what happened last night with Braun Strowman and Bobby Lashley.

Kevin Owens is out and he’s having a great time, but he could have an even better time as a babyface.

Owens brought out Shane McMahon and Drew McIntyre after hyping their upcoming match against Undertaker and Roman Reigns.

Kevin Owens brought up how scared Shane was of The Undertaker. Then Shane told KO to shut up and read from the cards he was given. Then Owens read a bunch of lines that were supposed to put the heels over, but Owens asked Shane about losing to Taker instead. Shane tried to fight Owens, but Ziggler’s music hit.

Then Dolph Ziggler came out to say this is not how it’s going down. Dolph and Owens were upset at each other and then so Shane McMahon booked them to be a tag team. They have a match against Heavy Machinery tonight. If they win that match then they’ll be in the Extreme Rules tag team title match and it’ll be a triple threat.

Big E sold for Bryan for most of the beginning or this match and they cut to commercial with the action continuing in a picture in picture box.

E had a little bit of a comeback, then Bryan hit some Yes Kicks and Big E hit a belly to belly and a splash for a two count.

Big E missed a tackle through the ropes, but when Bryan went for a dive, E knocked him with a forearm. As the official looked after Bryan, Rowan ran Big E into the ring post and rolled E back inside.

Then Daniel Bryan took out Big E with a running knee and got the win.

R-Truth was interviewed backstage where he said that Drake Maverick was on his honeymoon in San Antonio so he’s going to find him.

Alexa Bliss told Nikki Cross that she’s hosting A Moment Of Bliss with Bayley next.

Nikki Cross seemed super nervous, but at least she got to use Bliss’ bedazzled microphone. Before she got started, Cross thanked Bliss and said she loves her.

Nikki revealed she’s from Glasgow Scotland and she’s got an accent. Shocker. She promised to speak slowly so she can be the best host she can be.

Bayley came out and she said that she’s impressed that Bliss is giving Cross some of her spotlight. Then Bayley said that she doesn’t have to do Alexa’s bidding, but Cross said she’s there to ask the tough question. Nikki asked Bayley why she called Alexa a lair — “She is a liar” was the reply.

Then Bayley wondered why she’s facing Alexa at Extreme Rules when it should be her because Cross keeps winning. Then they had a match.

Bayley was doing good until Cross got a fire lit under her. She started taking Bayley down with clotheslines.

Then Bayley came back and won with a Bayley To Belly