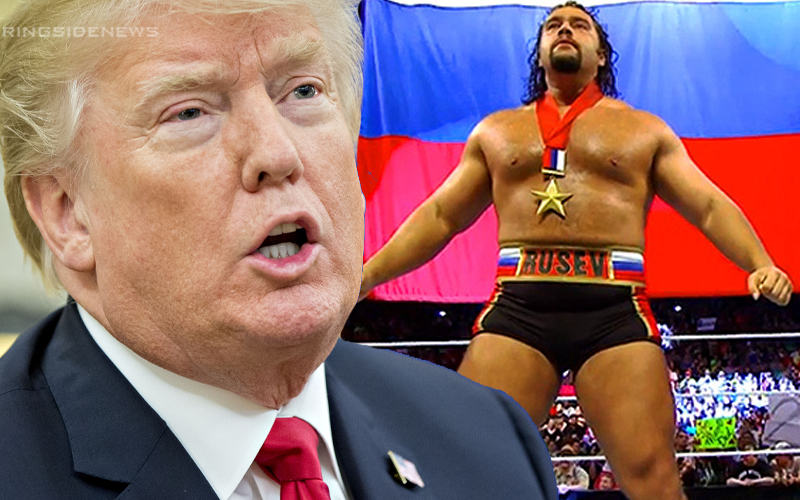 Rusev and Lana used to bring a lot of heat on themselves for pledging their alliance with Russia and Bulgaria, but then that gimmick seemingly went away without much notice. Now Lana has no Russian accent and Rusev simply isn’t being used on television much at all.

While speaking to Video DIRBG in Bulgaria, Rusev revealed exactly why WWE nixed the Russian heat. Because they were aware of the trouble Donald Trump was getting himself in with his relationship with the Russians. Therefore, WWE didn’t want to make things worse so they decided to cancel the entire program and move onto something else.

“It’s true, we keep up and Vince [McMahon] keeps up with what’s going on globally. He noticed that tension between Russia and America at the time and that’s when it was decided that I’ll go represent Russia and Putin and whatnot. But things changed, [Donald] Trump was elected as US President and he is a WWE Hall Of Famer etc.”

“‘Also people saw more [of me] from Total Divas and we started trying different stuff and we struck gold with ‘Rusev Day’ two years ago. It started kind of as a joke. After Randy Orton beat me in 10 seconds and I beat him back the following week it was decided that we’ll throw a celebration and we got the Mayor of Plovdiv to give the key me to the city.”

“Aiden English who is a great singer and actor learned the Bulgarian anthem in a day and sung it and we just started adding ‘Rusev Day’ to everything. That’s when things took off, the [Rusev Day] shirt was the top seller.”

Interestingly enough, Rusev got more over as a babyface than he ever did as a heel while wishing people Happy Rusev Day. However, Rusev Day soon fell on the wayside as well because they were getting over so organically and WWE seemingly dropped the ball in a big way.

Hopefully, Rusev will get another big shot at a push in WWE. He is currently on hiatus, but you never know if WWE could figure out something else for him to do.