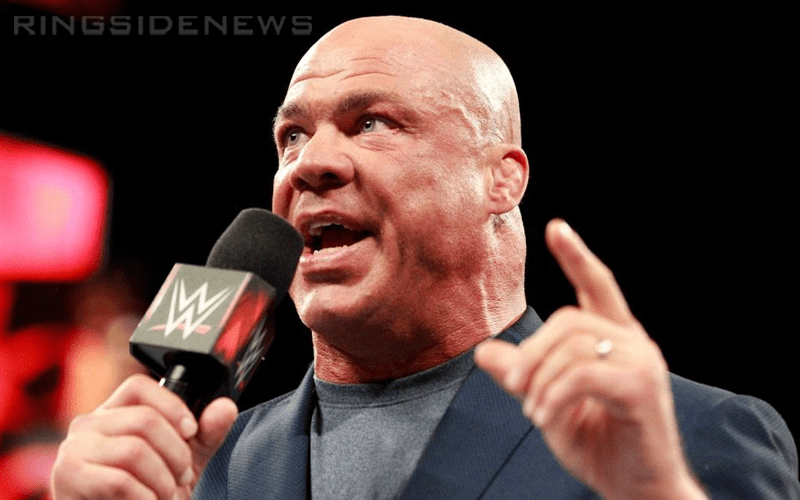 WWE seems to be trying new things, but they are not going away from the TV-PG format. If anything, they seem to be doing things to make the shows more family friendly.

Kurt Angle recently took part in yet another Q&A on his Facebook page. He was asked about the current WWE product and he defended it by saying it’s “as good as they’re going to be.”

Fans might like to see a return to the TV-14 days of yesterday, but WWE’s new self-imposed TV-PG format not only brought them more money, but it seems to be making their stockholders very happy in the process.

“The shows are about as good as they’re going to be. Keep in mind that WWE is a worldwide phenomenon. It’s bigger than ever. With that comes responsibility. WWE is a publicly traded company that gears toward children and families. During the attitude era, WWE catered to young adults. The storylines were Rated R type storylines. WWE can not do those types of storylines anymore.”

“And IF they do, it has to be done very carefully. WWE has shareholders that are involved in the product. The shareholders want the company to remain a “family” type show. That’s the difference in writing. As far as the wrestling is concerned, it’s every bit as good now as it ever was. These are strictly my opinions, but I think they’re accurate.”

WWE is not stepping away from the TV-PG format any time soon. However, that doesn’t mean they aren’t willing to open up their minds for more change.

It is interesting how they seem to be teasing a lesbian storyline, but in today’s current climate, if done tastefully, WWE can probably get away with a lot more than they’re currently trying.