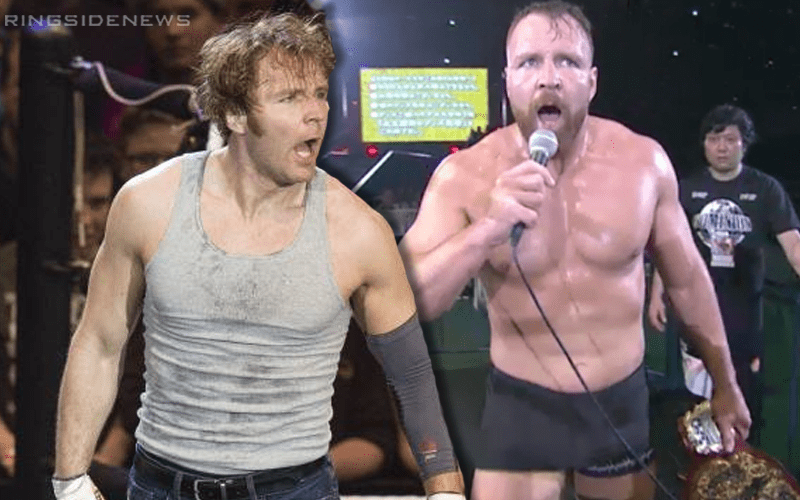 Jon Moxley wrestled for WWE as Dean Ambrose and for nearly a decade we got very used to seeing him wrestle in jeans and an undershirt. However, that is not what Moxley is wrestling in now.

When he worked his first match for NJPW he not only walked out as IWGP United States Champion, but he also surprised fans with his new ring attire. There is a very good reason for this change.

While giving an interview with New Japan’s website, Moxley revealed why he switched up his ring attire after leaving WWE. He took off those jeans and traded them in for some proper wrestling attire because wrestling in jeans is really hard.

“I wanted to change my look, for sure. When I was in WWE, I always wrestled in jeans, and there was a reason for that; everybody else had fancy tights and I wanted to be the opposite. More grungy, a street fighter type. But wrestling in jeans, honestly, it sucks. They’re hot, sweaty, hard to move in. I’m done with wrestling in jeans! It’s so much easier to wrestle in tights.”

“My boots situation was a nightmare before I wrestled. I had a pair I bought that I was trying to break in, but they didn’t fit right. I tried another pair, they didn’t fit, either. They were too clunky. So I just went with regular wrestling shoes.”

“When I looked in the mirror before I went out, I felt naked because I was so used to wrestling in jeans. So I knew then that it would cause a reaction, and be a bit of a shock.”

You can’t blame Mox for ditching the old wrestling gear. He’s working in different buildings now in front of new fans. Those buildings can get really hot and he sweats enough as it is.

Mox is also smart enough to understand that changing up his ring attire would get a lot of people talking which it did. So Moxley’s return to the world outside of WWE needed a fresh look all around and it seems to be really working for him so far.