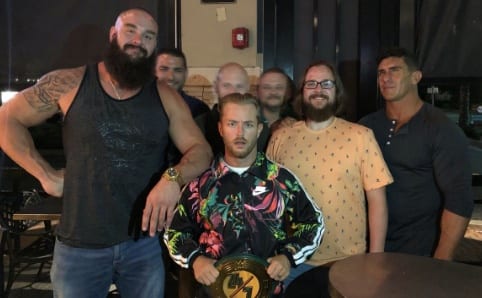 Drake Maverick’s week began with him finally capturing the 24/7 Championship, and it’ll end this weekend in the best way imaginable – he’s getting married.

Following his title win a lot of fans have been speculating as to whether or not he’d actually lose the title at the wedding itself, and quite simply put, that sounds like the most incredible idea and we really, really want to see it.

Of course, this would mean that a few WWE superstars would need to be present at the wedding: and as luck would have it, two big names are actually going to be groomsmen for the Brummie 205 Live general manager.

We’d imagine that if they decided to go ahead and book a title change during the wedding weekend, they’d film a ‘replica’ version of the ceremony itself. Then again, perhaps Drake wants to just push through and do it during the actual ceremony. That’d certainly be something.

It’s always interesting to get a feel for which superstars are friends outside of the ring, because we so rarely get a chance to see it on screen. After all, who would’ve figured that Drake and Braun would be good pals?

The content that the 24/7 Championship has provided us with over the course of the last few weeks has been nothing short of spectacular, and we’re excited to see how things continue to progress. Either way, a big congratulations goes out to Drake Maverick on what is surely one of the craziest weeks of his life!