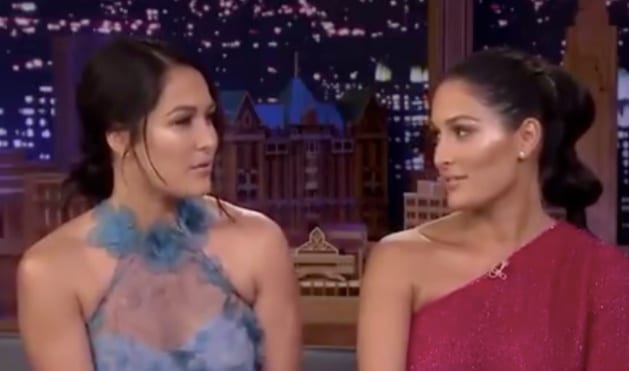 You may not like it and you may even hate it, but it appears as if Total Bellas, and by default Total Divas, isn’t going anywhere.

Nikki & Brie Bella have been able to build up a great following over the course of the last few years, to the point where they are easily two of the biggest female names (in terms of star power) in WWE history.

Both seem to have officially retired now, barring a miraculous return in search of the tag titles, and are able to spend more time working on their many projects – which includes their reality TV ’empire’ of sorts.

The duo appeared on the Tonight Show with Jimmy Fallon last night in order to talk about all things from TV to WWE to Total Bellas and everything in between. WWE has been building up a relationship of sorts with Fallon and his show for quite some time now, with many top stars making appearances in the last few years.

Both Brie and Nikki seem to be incredibly capable of handling themselves in situations such as these ones, which can only be a good thing for their future.

The question now is simple: what do they do next? They’ve already kickstarted the Bellas Podcast and have their fingers in a million different pies, but when it comes to these two, it’s difficult to rule anything out.

Whatever the case may be, fans had better get used to the fact that they’re going to be around for quite some time.