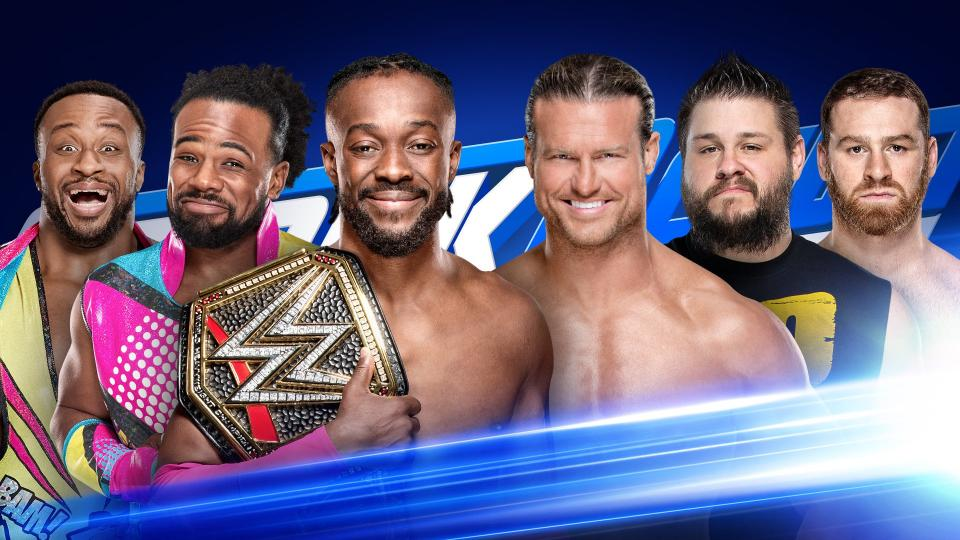 Welcome to Ringside News for SmackDown Live results. Keep refreshing at 8:00 PM EST and we’ll start our coverage when the action starts.

It’s Tuesday and R-Truth is still the WWE 24/7 Champion so he will probably be running this week just like last night on RAW. The New Day are set to clash with Dolph Ziggler, Kevin Owens, and Sami Zayn as well.

The big news story is that Big E is coming back to action to compete in that six-man tag team match. Hopefully, this is a legit return and not a false one like what we had a few weeks ago.

Roman Reigns can’t be happy about Shane McMahon beating him at the Super ShowDown so he’ll probably continue his feud with Drew McIntyre tonight.

Bayley is still the SmackDown Women’s Champion, so we could probably expect her to have something to do with her Stomping Grounds challenger Alexa Bliss.

It was said that Miz was being forced to host this episode. The Miz was very over, but The Miz didn’t seem happy, but he was wearing his dad’s new merch. Then The Miz said that he has to follow the script tonight which he started to read while introducing Drew McIntyre and Shane McMahon.

Miz read “Pest of the world” instead and McMahon didn’t seem to like that so he had Greg Hamilton do the intro instead. Shane came out with Drew and Elias.

Elias played a little solo on guitar and he really had gotten very good. Then the crowd chanted “you suck.”

Then The Miz went off at Shane for barely winning every one of the things he brags about. Then he showed a clip of Roman Reigns saying he is going to kick ass and take names at Stomping Grounds.

Drew McIntyre said he’s going to win. He has no remorse, no pity, and he has a weapon nobody else has. The boom stick The Claymore Kick and he’s going to kick Drew’s damn head off.

The Miz called Shane a talentless hack who won the lottery by being a McMahon. Shane said Miz comes from a genetic cesspool who shares the DNA with a baked potato. Shane teased setting up a match, but The Miz has to beat Elias and then he has to beat McIntyre. If he can beat them then he can have another shot against Shane.

Then they started the night off with those matches.

The Miz vs Elias

It didn’t take long for The Miz to beat Elias with a Skull Crushing Finale.

The Miz vs Drew McIntyre

McIntyre maintained control through most of this match until The Miz sent him outside the ring and he sold an injury. Then The Miz hit a dropkick through the ropes and ran Drew into the barricade.

Drew tried to do something to Miz, but he countered and kicked his knee before hitting a DDT. Shane distracted Miz and Drew hit a Glasgow Kiss. Then Miz took a Claymore Kick and Drew beat him.

Shane said that he was going to give The Miz this match anyway.

Shane McMahon vs The Miz

The Miz tried to fight out, but Shane ended up getting the upperhand and then he slapped on an awful-looking triangle and got the win.

Sonya Deville and Mandy Rose bullied Ember Moon again and Moon lost it. Be A Star.

Daniel Bryan and Rowan were in the ring and they cut a promo about how the crowd is in for a real treat. Because the SmackDown Tag Team Titles will be on the line in a title unification match against the YOLO Tag Team Champions.

R-Truth and Carmella were backstage as Truth talked about losing his title on the way to Saudi Arabia. He said the “7/11 Championship is ruining my life, but I can’t let it go.” They heard a bump and Carmella hid Truth in a trunk and accidentally locked it. Someone said Mella’s match is next so she left.

Truth kept yelling and then Jinder Mahal came up and did a bad Carmella impression and told him to stay there saying he was getting a crowbar.

Deville played the relentless heel and Mella took a lot of abuse throughout much of this match. Carmella wouldn’t stay down for the pinfall.

Mella slapped Deville and Sonya kicked her in the face. She got the Code Of Silence, but Mandy put Sonya’s foot on the rope to cause the hold to get broken up.

Mella chased Mandy around the ring and then both she and Deville ended up outside the ring and Carmella hit a suicide dive on them both. Mella hit Mandy with a Superkick, but Deville caught Mella with a step-up knee strike when they got back in the ring for the win.

They hyped the actual return of Big E and he had no kneebrace this time. He said that if he had a title for every return he’s had he’s be Charlotte Flair. Kofi said “that’s a booking joke.” Then Woods said they need to get this over with so he can get back to E3.

Dolph came out and said Kofi never beat him, but at Stomping Grounds there will no place to hide in a cage. Zayn and Owens came out too. They started a back and forth and Big E wrapped it up by cutting a promo at them about how hard Kofi has worked. Because… New Day Rocks!

Nikki Cross really wanted to take it to Bayley because Bliss told her that she liked a mean tweet about her.

Bayley created an opening and she hit a running boot before hitting a splash for a two count. Cross almost got a pinfall, but Bayley set her up for the top rope elbow and hit it to get the win.

Jinder Mahal ran up looking to Truth, but the crate he was in was already in the truck headed to LA. Carmella couldn’t find him either.

They played the Firefly Fun House segment from last week. Do you think it was about Jon Moxley?

It wasn’t long until Zyn was taking a Unicorn Stampede from the New Day and then Woods pinned for a two count.

Then Sami moved and Kofi went flying into the turnbuckle alone to bounce off of it an fall to the floor. Dolph hit him with a running forearm and then took the tag to continue the abuse.

Kofi was taken out on the outside again and Kevin Owens nailed a running senton on the floor.

They moved back to the ring and Ziggler continued the assault on the champion. Then KO took the tag to continue wearing down Kingston who finally tagged in Woods.

Xavier took the fight to Zayn and then he hit Ziggler and Zayn with a dropkick through the ropes. Woods climbed to the top rope, but Ziggler crotched him on the top rope.

Xavier hyped himself up and eventually got out of a headlock with some chops, but Zayn countered Woods and pummeled him with punches before tagging KO back in.

Woods tried to roll out of the way of a moonsault, but Owens hit him anyway for a two count. Then Woods nailed a DDT and tagged in Big E.

E hit a trio of belly to belly suplexes before swiveling his hips and hitting a splash on Ziggler. He went for a dive, but Dolph hit him with a knee. Big E countered and he tagged in Kofi.

Sami took the tag without Kofi seeing it. Then Ziggler hit some Superkicks, but Kofi nailed Trouble In Paradise for the win.