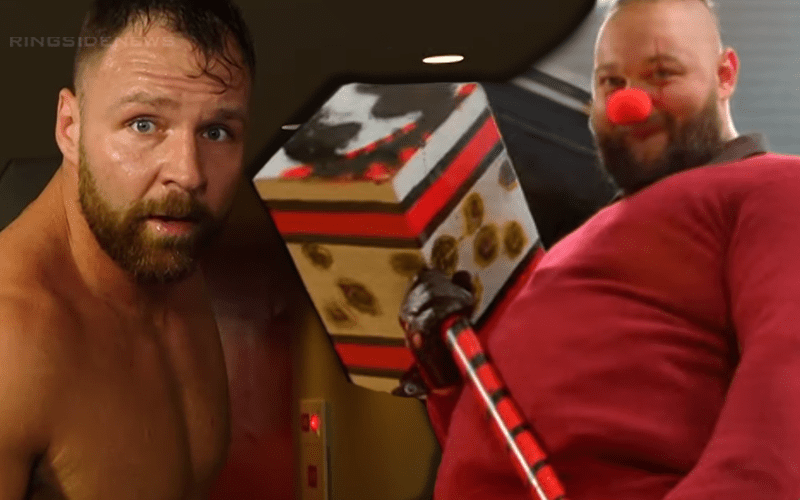 Bray Wyatt debuted another Firefly Fun House segment this week on RAW and it was quite twisted, but was there a deeper meaning behind everything that went on? There’s a new conspiracy theory worth checking out.

The sign that Bray put on the door said: “Abandon all hope ye who exit here.” This could have been an allusion to speaking about Wyatt’s twisted PTSD mind, but other fans saw an immediate reference to WWE and the current exodus that a lot of WWE Superstars are said to be taking part in.

Ramblin Rabbit felt like he wanted to say something during this episode as well. He was tired of having Mercy The Buzzard eat him, but then when he got up to talk about what is really going on in the Fun House, Bray smashed him with a comedically over sized mallet.

After Bray Wyatt realized how good Ramblin Rabbit’s guts tasted, he decided to then market it as a spread much like some kind of homemade strawberry preserve.

Some fans immediately started a conspiracy theory that this segment was done in a way to take a shot at Jon Moxley’s shoot interview on Talk Is Jericho.

What makes this even more interesting is that when Wyatt turned on Ramblin Rabbit he was wearing red make-up on his eyes that resembled Chris Jericho’s eye make-up that he wore at NJPW Dominion and other events since leaving WWE.

The mallet Wyatt used also looked like a dice which could be a symbol for Double Or Nothing. Also, they used the “Konichiwa” greeting which is Japanese for “good day.”

The real question is when they filmed this segment. Things could be all a coincidence, but there are some aspects that make this theory hold a lot of water.

We would love to hear your thoughts on this conspiracy theory below.