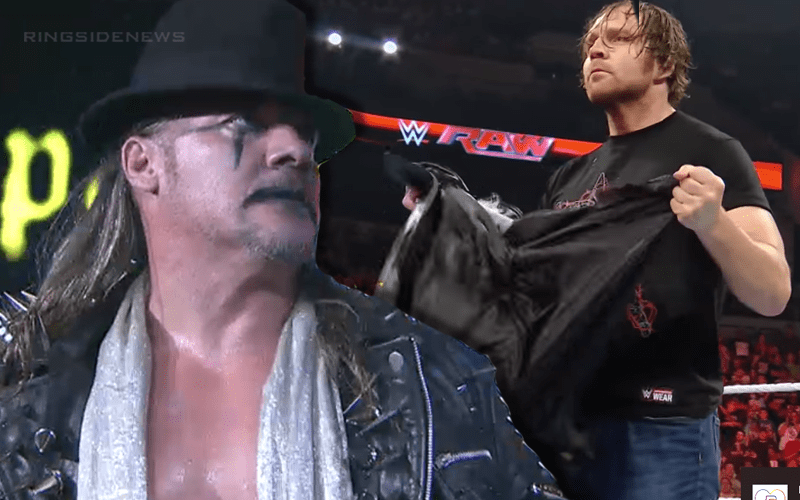 Sometimes it’s just hard to let things go, even if you’re Chris Jericho. Now Y2J is back in NJPW and he’s right there with someone he knows well from their time in WWE, Dean Ambrose aka Jon Moxley.

After the big Dominion main event match and Jericho was done raising hell in Osaka, he went backstage to cut a promo to the press as they waited for him. He still had an “Okada Buck” on his forehead stuck with sweat from his brutal battle as he carried on about how he will take on anyone who gets in his way.

It’s interesting that Jericho seems to have a bone to pick with Moxley after the two released a podcast not two weeks ago that lit the IWC on on fire. Mox used Talk Is Jericho as a great platform to have his message heard, but now that time is done and Chris Jericho is nothing but business in the ring.

After Jericho teased that he might show up at the G1 Climax Tournament if Okada and Tanahashi are in it he also took the opportunity to throw a jab at Moxley.

You can argue that Mox didn’t rip up Jericho’s jacket because that was Dean Ambrose back in the day, but it doesn’t change that Jericho hasn’t forgotten about who did it, no matter what they call him now.

Y2J is ready to take on all comers in NJPW. It will be interesting to see how much involvement Jericho and Moxley will be able to have once AEW’s television show started in the fall, but they are plenty entertaining wherever they show up.