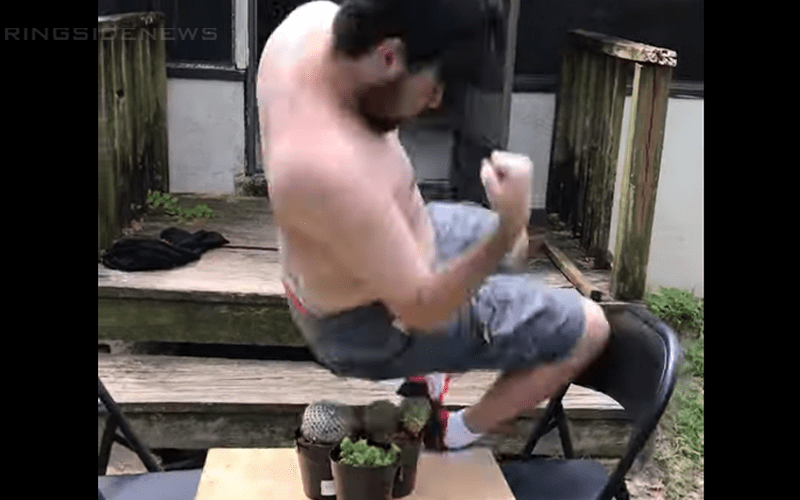 The internet is full of very interesting things and we have stumbled across a certain account on YouTube that pays homage to some of the most fantastic stunts in pro wrestling history. Some things on this channel are totally original as well because, who would think to do this kind of stuff?

Super Humman might not really have super powers, but once he screams “F*CK THIS SH*T” it’s on for his Juggalos and Juggalettes.

n might not really have super powers, but once he screams “F*CK THIS SH*T” it’s on for his Juggalos and Juggalettes.

He took an elbow drop to a toaster and leaped into a wheelbarrow full of legos. He event dropped an elbow on a cactus to pay homage to Cactus Jack himself, Mick Foley.

For some reason he also drank hot sauce and ran into a brick wall over and over again. We’ve spent the last bit watching a slew of these videos that aren’t more than 20 seconds apiece. Needless to say, it looks like we have a winner and we just had to share this with you, our awesome readers at Ringside News.

Super Humman always says to not try this at home too which is very good advice. Because nobody should want to do these things anywhere.

Please keep in mind that pro wrestling is something that takes training and skill, but it looks like this kid found a great way around that. Honestly, the biggest travesty in most of these videos is that they aren’t filmed in landscape mode.

You can check out some of his videos below. At this point, he has quite a following and nearly 20,000 subscribers so we’re obviously not the only ones who see the entertainment value this guy brings to the table.

By the way, Matt Riddle is apparently a fan too.