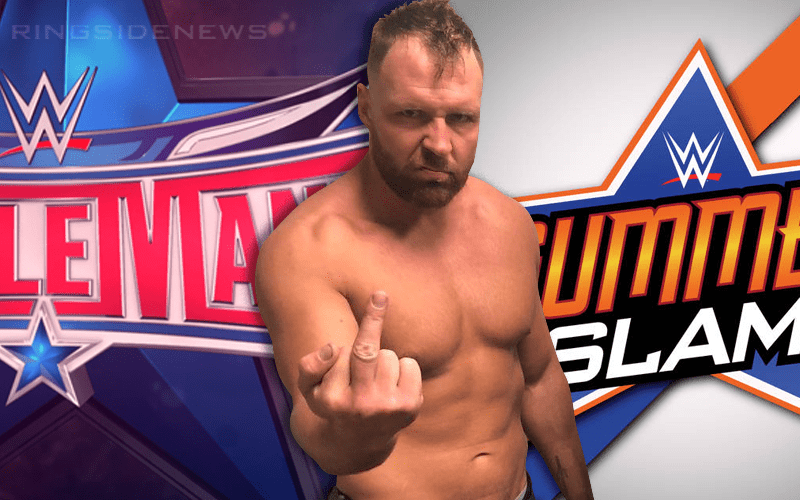 Jon Moxley is no longer with WWE anymore, but he’s not shy about discussing his days with Vince McMahon’s company at all.

While talking to Flip The Strip, Moxley revealed how his big WrestleMania match against Brock Lesnar should have been different. However, Brock Lesnar showed up at 6:00 PM on the day of the show just before they were set to start the event and changed things around.

If you remember Dean Ambrose’s interview on the Steve Austin Show this was discussed, however, Mox didn’t have a problem blaming Brock Lesnar and Vince McMahon for allowing The Beast Incarnate to do whatever he wanted in the match.

“How it ever went was Brock’s idea, Brock, comes in at 6 p.m. and changes everything. Vince is like, we are going to go with Brock’s idea. It made everyone else look stupid but Brock.”

Last year’s SummerSlam event was supposed to be much different as well. The ending should have seen the Hounds Of Justice reform on a very big stage. Instead, they had to settle for The Shield getting back together on the next night.

While Roman Reigns, Seth Rollins, and Dean Ambrose finally reuniting in an official sense on the night after SummerSlam was exciting, Moxley explained how changing the timing of their reunion didn’t do the storyline any favors by waiting an extra night.

“SummerSlam this year the end of the show was supposed to be when the Shield returns. We were worried about it not being as impactful the next night. It still worked just as good. The end of SummerSlam was Roman vs. Brock, Braun comes out, looks like a doofus because he can’t figure out how to cash in.”

AEW is already affording Jon Moxley more freedom than he ever had in WWE. Do you really think Vince McMahon would let Dean Ambrose smoke a cigarette on television?

We have only seen the beginning of what Jon Moxley is going to do in his time away from WWE, but we will be watching very closely. At the same time, Mox will probably be paying attention to what is going on in WWE because he still has some very good friends who are still there trying to work in that environment.