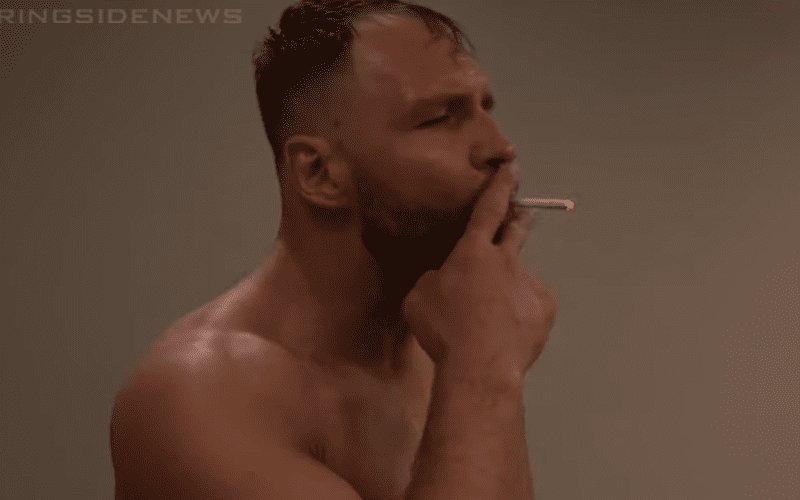 Jon Moxley is no longer Dean Ambrose and that is quite apparent. He is free from the chains of his WWE contract and now he has a lot more control of what happens to his character in AEW.

It’s very well known that Vince McMahon hates smokers. He even gave a guy $500 and paid for his seat back in the day so the guy wouldn’t smoke on a flight he was on (back when they allowed smoking on planes). McMahon might miss Dean Ambrose, but he wouldn’t like Jon Moxley because Mox is apparently a smoker.

After making his surprising AEW Double Or Nothing debut, Moxley paced around backstage when he was approached by Joey Janela. The Bad Boy started Double Or Nothing by getting a lit cigarette stapled to his head during the Buy In Battle Royal, but it looks like he didn’t kick the habit by the end of the show.

Joey Janela walked up to Jon Moxley and lit a cigarette. The unpredictable Moxley looked at Janela for a moment before plucking the cigarette out of Joey’s mouth and putting it in his own. Then Jon Moxley took a puff from the cigarette before flicking it across the room.

As Jon Moxley left without saying a word, Joey Janela looked off at Mox and didn’t look too happy. Perhaps this could signify that Joey Janela didn’t appreciate that move from Moxley, but it could also mean that we could have an epic hardcore match on the way in AEW.

All Elite Wrestling has a few people who are famous for their death matches namely Jimmy Havoc and Joey Janela. With CZW death match alum Jon Moxley in the picture we could be seeing some blood baths in AEW as things progress.

Either way, it was still amazing to see Moxley in this environment and surreal to watch him smoke on a cigarette. You can check out the video below as it should be cued up to the segment.