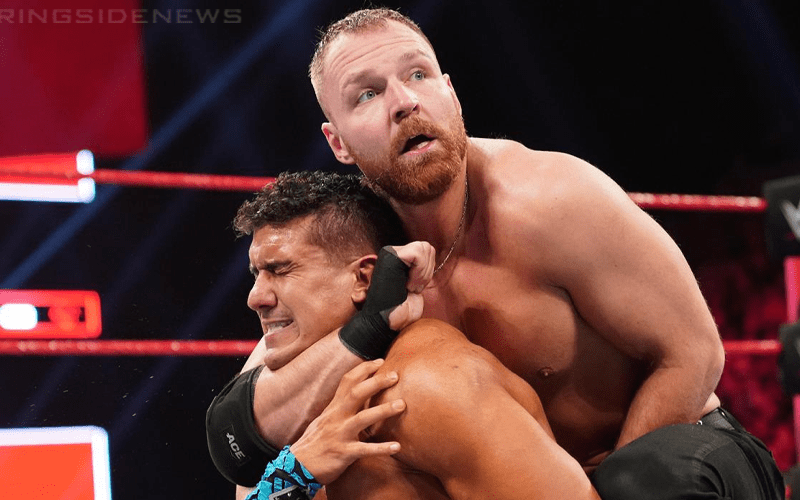 Dean Ambrose had to suffer a few embarrassing moments on his way out of WWE. While they didn’t bury him completely because he was a member of The Shield, The Lunatic Fringe still experienced some losses that he might not have otherwise encountered. Now Jon Moxley has no problem talking all about it.

On Talk Is Jericho, Moxley walked listeners through his brief rivalry with EC3. The newcomer from NXT defeated Ambrose in very short order on RAW and fans saw right through this booking decisions.

It turns out that not many people liked seeing Ambrose lose when they knew why he was booked in that role. This also didn’t do EC3 any favors at all as Moxley explained in his own words.

“Then they put me against EC3 debuting from NXT, great talent — great friend of mine, excited to work with him. They have EC3 come in as a babyface and defeat me in two minutes.”

“The crowd does not like this because it’s transparent what’s happening. This is not good for EC3 because not he’s gonna get the backlash so this is an unfair position for him to be put in. So then we get to that weekend and I’m working with EC3 on house shows. Now I’m the biggest babyface on the show. I’m a heel, I’m thumbing him in the eye, I’m making fun of the town, doesn’t matter they’re violently rejecting him as a babyface and cheering the hell out of me because now it has nothing to do with him it’s like an anti-WWE, yeah.”

Then Ambrose got a text from a writer who told him that he’s going to be defeated by EC3 on RAW once again in two minutes next week. This time Moxley had to say something about how this is backfiring on EC3. The writer said that he knew this, but it’s what Vince McMahon wanted to happen.

“By the time we got to that Monday from what I understand the reports from the house shows the producers are telling him what happened and he’s pissed. Apparently, he’s like mad about this that like god forbid so sorry the fans who I’ve busted my ass for for years might be upset about the fact that you want to bury me on my way out, you know like sorry dude that I’ve like given my body up for. Sorry that they have a shred of respect for me that apparently, you don’t have.”

“So then I get to the TV and Jamie [Nobel] the producer comes up to me and says you’re gonna do a little promo with Seth and he’s a heel you’re a babyface. We just switched roles with no explanation so I guess that’s their solution so the Shield comes back and we do that whole thing.”

Dean Ambrose transitioned into a program with Drew McIntyre where DQ finishes were starting to become the norm.

He thought that WWE was writing him off of television every week as they kept putting him through tables and wrapping his head around guard rails, but that didn’t happen either as he remained on television until his contract was up.