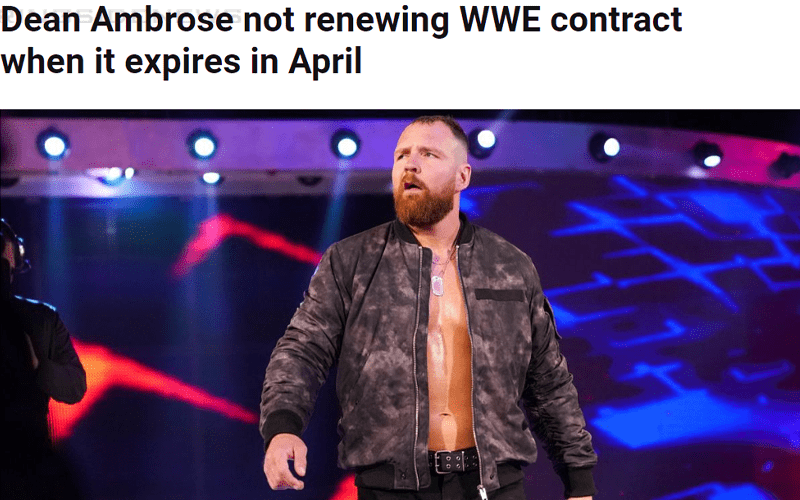 Jon Moxley says whether WWE buried him on the way out is open to interpretation. Because they didn’t finish him up at WrestleMania. In fact, he didn’t even work WrestleMania. He was actually appearing at WWE Axxess on the morning of WrestleMania which is a spot reserved for people who aren’t on the show of shows.

While speaking to Talk Is Jericho, Jon Moxley explained the process of leaving WWE in full detail. He was getting depressed about his work which is something he used to love to do.

Once the news got out that he was leaving WWE, Moxley said that his phone started ringing off the hook from people asking if it was true. This is when the company did something very unusual for something leaving WWE.

“So now they put out this weird press release. It was so bizarre. People are like what is this press release and I’m like, ‘That’s AWESOME!’ It’s never been done before. All that ever happens is the ‘we wish you the best in your future endeavors.'”

“It’s unprecedented. It was like a glowing review and so I was like ‘Okay cool I’m not saying anything.’ What I think happened was like they were getting backlash or whatever. I don’t know the motivation behind that press release, but that’s why a lot of people thought it was a work.”

“Because they want to control the narrative. That’s the thing Vince hated about this whole situation that’s why it was so bizarre and so many ups and downs cause he has no control. I told him I don’t care how many zeros you want to put on a piece of paper I am gone and he’s got the Million Dollar Man complex. He’s gotta be able to buy everyone. That’s why he pays Brock [Lesnar] billions of dollars to come in and ruin his company because he wants to own Brock. He wants to be like ‘Ah Brock’s my attraction!’ ya know?”

Suddenly, Vince McMahon found himself working with a man who he had no power over in Jon Moxley. Because Jon never looked at his new contract before handing it back to them while saying he’s not interested.

Ambrose wondered what he would do with $10 million if they offered it to him. His truck and house is paid off and he has everything he needs. He doesn’t live extravagantly and didn’t need that much money even if WWE offered it to him. He said there was no number they could have written down that could convince him to stay.

He went through a physical depression because they took away what he loved to do. There was no need to come up with his promos, matches, or stories because WWE pays people to come up with that for them.

Moxley didn’t want to just show up to work. There were Monday mornings when he just couldn’t get out of bed. Therefore a change needed to be made which is exactly what he did.