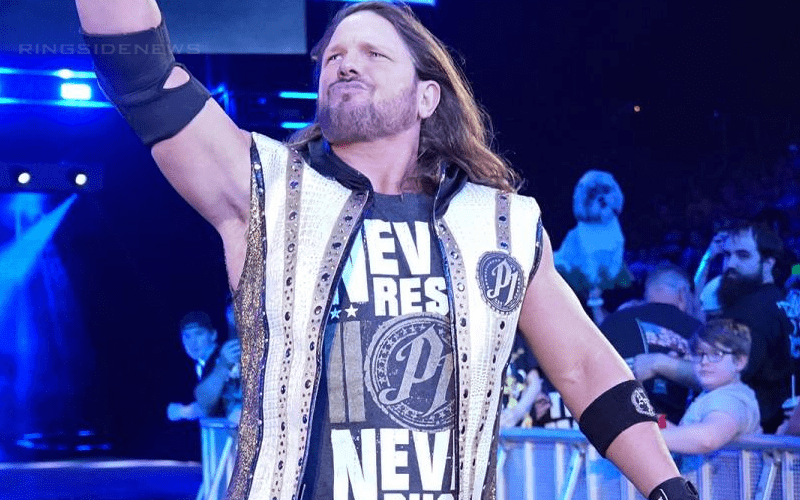 AJ Styles made his allegiance very clear when he recently signed a new multi-year deal with WWE. However, he also later stated that his most recent contract with the company will be his last. Regardless of his future intentions, Styles doesn’t believe that anyone needs to be competing with WWE.

AEW made a few big moves at Double Or Nothing. Not only did they reveal Jon Moxley’s signing, but The Elite presented a card on the level of a WrestleMania without selling out a stadium even though they might have been able to.

While speaking to Newsweek, Styles stated that he feels “the indies and whatnot” should be competing with each other and not WWE. Because WWE is so huge that “people don’t understand it.”

“As far as the indies and whatnot, I don’t think they should ever be competitive with the WWE. They should compete with themselves to make sure they get better everyday because there’s no competition, if you want me to be honest. WWE is globally huge. It’s unbelievable to know how big the WWE is. People don’t understand it.

“If you want to succeed, don’t compete. Be something different, be the alternative. There’s a lot of people that have a good chance, but competition is always a great thing. I hope any company does well so they can be that competition. Competition will always make a better product.”

Most indie wrestling companies don’t have what it takes to compete with WWE. Because Vince McMahon’s company is very powerful and has a ton of resources. However, not every company away from WWE is an “indie company” and fans are starting to realize this.

Styles’ suggestion that people should be different if they want to succeed is great advice. However, WWE might not be the only major player around anymore because once AEW’s new television deal begins on TNT it will solidify them as not just another indie company.