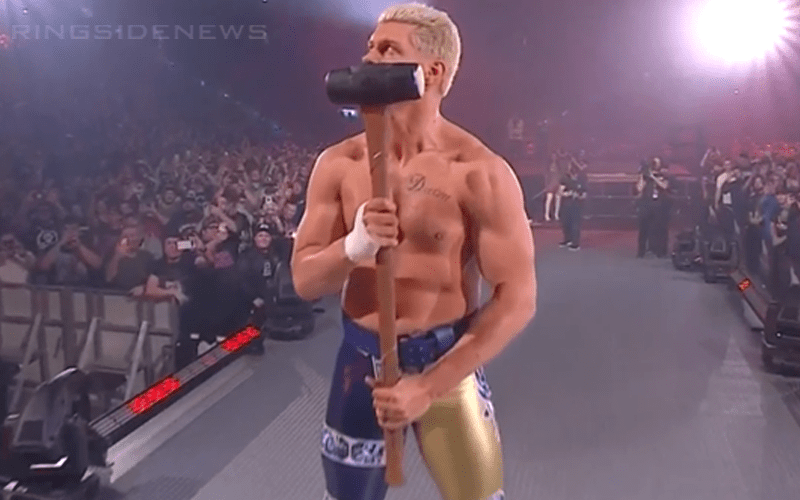 Cody Rhodes destroyed a throne with a sledgehammer before his match against Dustin Rhodes started at AEW Double Or Nothing. The throne was meant to be a reference to Triple H and the fans popped loud at that shot at WWE.

If you would like to read our full results for AEW Double Or Nothing you can click here.

Cody Rhodes and Dustin Rhodes went to war at Double Or Nothing and ended up only becoming closer as brothers at the end of the match. Dustin Rhodes was bleeding like a stuck pig, but he’s okay now. However, fans couldn’t forget about the symbolism behind destroying that throne with a sledgehammer.

While still covered with Dustin Rhodes’ blood, Cody explained the meaning of destroying that throne to Chris Van Vliet.

“It was cool, the throne kinda symbolized his reign, and man, I wanna play ball. I know we don’t say competition, but it stands for itself. I also want people to know this role, this executive vice president role which I love, I’m excited about — I wanna be a wrestler first.”

“That’s great, we able to do that tonight. Tony Khan sat and timed the show that takes years how to learn. Gerald Briscoe did it, Tony did it tonight on his first try. So they don’t always need us in those executive roles. We were able to go out there and be wrestlers that more than anything — not so much a shot at Triple H, more a shot at I’m not ready to dive into that role and lean into it. I wanna be a wrestler first and foremost, I’m not done.”

Cody might have downplayed his response during this media scrum, but it was pretty apparent that destroying the throne was a super babyface move with this AEW crowd.

Some fans who traveled to Las Vegas did so because they love pro wrestling and are incredibly disenfranchised with WWE. Now there is a legit alternative and Rhodes made that statement very clear as did everyone who competed at AEW Double Or Nothing.