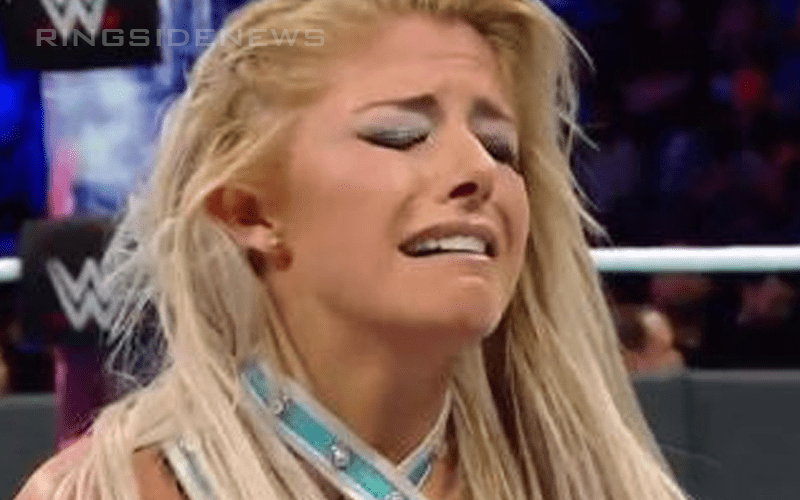 Alexa Bliss was pulled from the Money In The Bank ladder match. She was replaced by Nikki Cross which was great news for Nikki, but it’s not a good thing for Bliss.

Mike Johnson reports at PW Insider that Bliss suffered from a concussion. This makes one of many concussions she has suffered recently.

It is not a good idea to keep a Superstar active if they keep getting concussions. After all, Daniel Bryan’s career was ended for two years due to this kind of injury. WWE has allowed Bliss to recover a couple of times, but it seems like this same type of injury keeps happening.

This might not be a good sign for her career. She didn’t work any matches during WWE’s European tour either due to WWE trying to give her time off to heal. However, the decision was made to place Nikki Cross in the match anyway.

Dave Meltzer did not confirm that Bliss was suffering from a concussion, but it was said that her injury wasn’t very severe and WWE was pulling her for precautionary reasons. Hopefully, it’s not as bad as it could be, but it’s still not a good thing if she’s being pulled from the MITB ladder match this Sunday.

Bliss won the Women’s Money In The Bank ladder match last year and cashed in her briefcase to become champion before the night was over. If she was looking for a repeat this year then that’s not likely to happen unless she can work out a very manipulative deal with Nikki Cross.

We’re pulling for Bliss to make a full recovery and never have to deal with this kind of issue again. Hopefully, it all works out, but you never know when WWE’s doctors could rule that she’s simply too prone to concussions to continue competing.