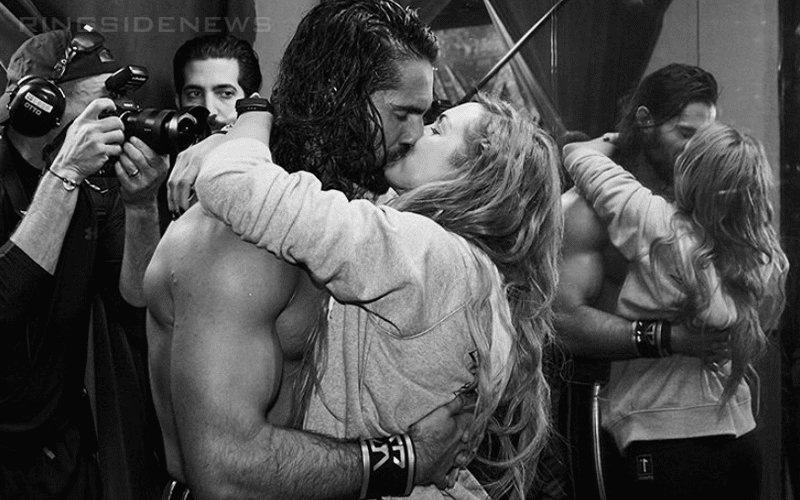 Seth Rollins shocked the IWC after Becky Lynch broke the internet on the previous night. The two are dating and seem very happy about it. It’s nothing they have kept hidden, but now everyone knows about them.

WWE has now officially reacted in a big way by publishing an article about the two on their website. This is very interesting because by the company acknowledging that these two champions are dating it could now become canon.

The company referred to The Man and The Beast Slayer as their newest “power couple” and wrote up a very short article. They not only congratulated them in a big way, but it also revealed that the photo Rollins shared was taken backstage at WrestleMania after he defeated Brock Lesnar for the WWE Universal Title.

In an Instagram post on Monday morning, Universal Champion Seth Rollins confirmed that he and Raw and SmackDown Women’s Champion Becky Lynch are officially an item. Rollins made their relationship public with an image of the two sharing a kiss following Rollins’ defeat of Brock Lesnar at WrestleMania 35.

Now that the cat is out of the bag and WWE is recognizing that these two top Superstars are a couple it makes one have to assume that it could creep into the on-going storylines.

We could certainly expect some mentions of their relationship in promos as their opponents take potshots at the new WWE power couple, but there could be a greater intention. Because as Beth Phoenix seemed to hint at a mixed-tag match between the two with her Hall Of Fame husband Edge by her side fans are certainly paying close attention to this situation.