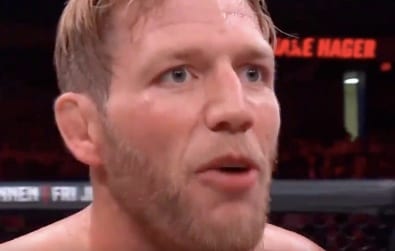 Former WWE superstar Jack Swagger aka current Bellator fighter Jake Hager has taken the time to explain his odd post fight interview from his win at the weekend.

Swagger put an end to the hype behind TJ Jones by submitting him, registering his second MMA win in the process. Many fans are expecting, and hoping, to see him get tested even more so in his next bout, as he continues to try and build some momentum in Bellator.

However, one of the biggest question marks surrounding the fight since it finished was his post-fight interview. As you can see in the clip below, it was a little bit odd to say the least.

We kind of love that he felt the need to explain himself, but in equal measure, it would’ve been fun to see fans spend months upon months guessing as opposed to knowing for sure.

This latest run in Bellator probably isn’t going to last forever, but when it’s over, it certainly feels like Jack aka Jake is going to be an even bigger star than he was going in. As a former World Heavyweight Champion, that’s saying something.

It seems like he’ll probably want to get back in there pretty quickly, and given the buzz that his opponents have been generating, there’s a chance that someone of a similar skill level to Jones could be thrown in there against him once again.

We wouldn’t complain all too much if that was the case, but we still want to see a step up in competition at some stage.