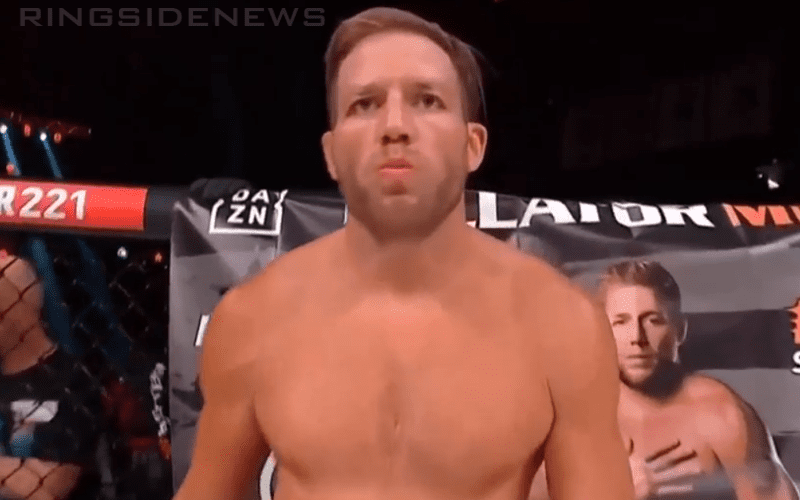 Jake Hager won his second MMA fight in the first round just like his first fight. His fight against TJ Jones did last a little bit longer than his first venture in the cage, but Hager thought the fight was still going.

After Jones tapped out to the triangle choke, Hager did not let go of the hold. The referee tapped Jake Hager on the shoulder, but he didn’t release his opponent. So the referee had to push the former WWE Champion off of TJ Jones.

When the fight was concluded, the referee walked over and admonished Jake Hager. He reminded him that he needed to be respectful and release the hold when ordered to. After all, the fight was already over when Jones tapped out.

The post-fight interview did not go well at all for the former Jack Swagger. The crowd booed him tremendously as he said that he didn’t want to give up the hold until someone made him. He tried to explain that during his first fight against JW Kiser, his opponent kept punching him in the back and that’s what he thought was going on when the referee was trying to get him to release the hold.

The crowd kept booing in the Allstate Arena so Hager diverted to pure WWE mode for a moment and asked if that was all they had while trying to rile them up even more. He said that the fans can boo him all they want because they aren’t in the cage and he is.

“I’m rock hard right now with emotion. I got a boner,” Hager said before telling his wife that he loves her.

The fans continued to boo even as he left the cage and they carried on with the night.

Jake Hager might have walked out of Bellator 221 as a big winner, but he upset a lot of fans in the process.