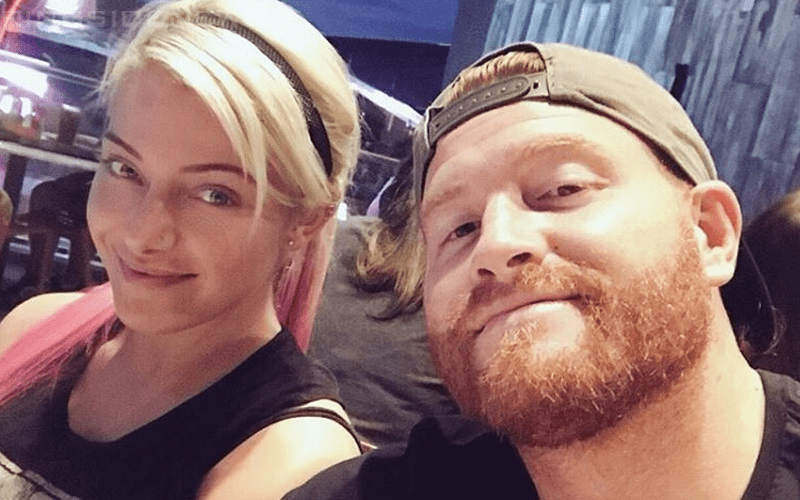 Alexa Bliss’ relationship with Buddy Murphy started in NXT as she was his manager and helped lead him and Wesley Blake to the NXT Tag Team Titles. Then she got called up to the main roster and left them both behind.

It was a little bit harder for Bliss to leave Buddy Murphy in NXT because the two were engaged to be married. They stayed together and were often private about their relationship. They were never really ones to show off on social media as a couple.

While Alexa Bliss was a cast member on Total Divas, she spoke with Buddy Murphy about possibly breaking up and what that might mean for his visa. He is Australian, but maybe WWE has a way around that. Because the rumor is that they broke up recently.

During the WWE Superstar Shake-Up, Bliss remained on RAW while Buddy got called over to the SmackDown Live brand. In all reality, Murphy was already traveling with the blue brand as a part of 205 Live so it wasn’t that big of a change. Bliss did send out a very simple congratulations tweet to him though, but she didn’t express any “love” in the process.

Fans have noticed recently that the mentions of Blake on Bliss’ pig’s Instagram have died down. Yes, Bliss’ pig Larry Steve has social media accounts and he’s very popular.

On a recent episode of “Not Your Demographic, Erin and Stella said that Alexa and Buddy have not gone public about this, but that they have broken up and are “just friends.”

We will have to wait and see if this is confirmed by either of them or if it will take Lilian Garcia inviting one of them back on her podcast to get the real answer about this situation, but it seems that they two might have split up.

Thanks to Bodyslam.net for passing that one alone