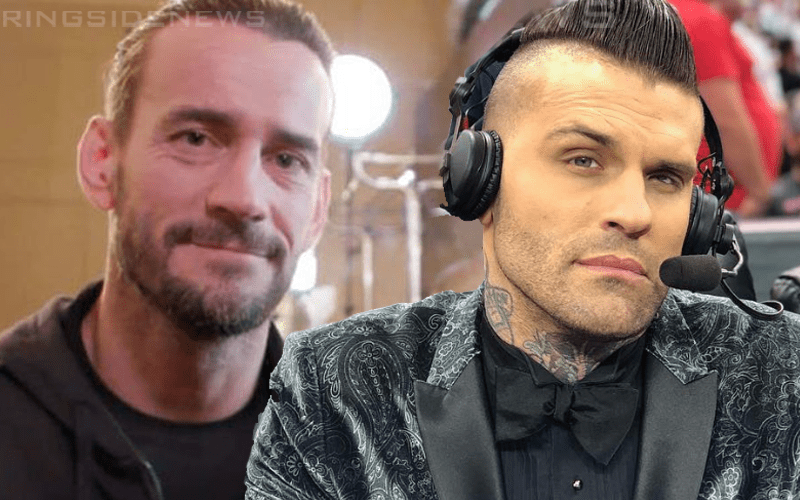 CM Punk has a lot of tattoos and so does Corey Graves. Some fans compared the two to each other, especially when Graves was in NXT. However, now CM Punk is getting into MMA commentary after Corey Graves is already retired from in-ring competition and quite comfortable at the announce table.

While speaking to Chasing Glory, Corey Graves discussed the comparisons to CM Punk that he used to get. He said that they continued until recently, but it never bothered him due to how influential CM Punk was so early on in Graves’ career. In the process, he briefly addressed how deep his friendship with CM Punk used to be and how it disintegrated.

“I get that a lot. [Punk] and I, up until semi-recently, were always close friends. He actually held my first-born kid before I did. I was in Spain. I knew my son was going to be born, and it became, ‘okay, do I take this tour of Spain to support my child or am I actually going to be in Pittsburgh [Pennsylvania] for him to be born.”

“Punk was actually in town getting surgery of some sort. He buzzed me and asked if I minded if he goes and see [my] kid? So, he and I were super tight. I had learned a lot from him, and different paths happened, and different career choices are made. He and I don’t speak with each other anymore, but I never take that as an insult when they say that they see a lot of him in me because he helped me out a lot early in my career.”

CM Punk still has a lot of people in WWE who he used to be friendly with, but they might not have spoken for a while. If WWE really is interested in a CM Punk return, then he might just end up reconnecting with some people he used to travel the world with and Corey Graves could be one of the first people waiting to greet his old friend.