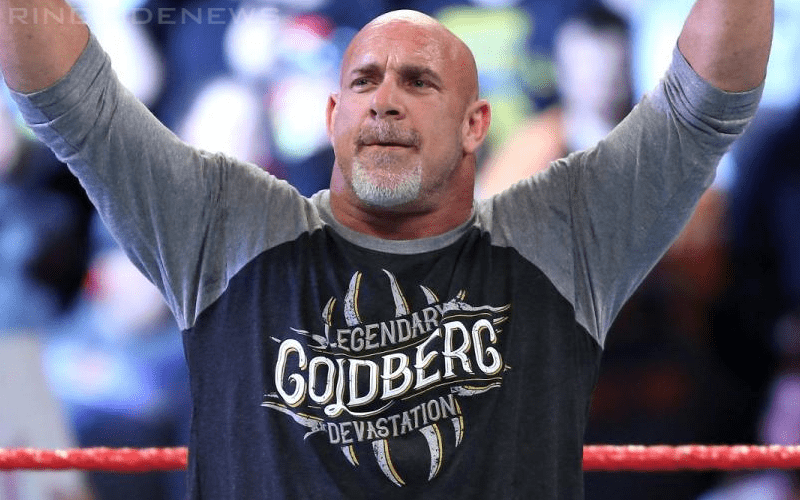 Goldberg will be returning at the June 7th WWE event in Jeddah, Saudi Arabia. We know that he was likely offered a ton of money, but no word on what he will actually be doing has been confirmed.

Details were not made clear by WWE when announcing Goldberg’s participation in this upcoming event. It turns out that the company’s ambiguity has sparked the rumor mill in a big way.

We have read rumors online and some actually reporting as fact that WWE is considering having Goldberg take Kofi Kingston’s WWE Title at the upcoming Saudi Arabia show. This is simply false which we have confirmed and there are no plans for that.

There are also a couple obvious ways you can deduce that this is a complete fabrication as well. For one thing, Goldberg is a babyface and so is Kofi Kingston. WWE doesn’t book babyface vs babyface matches because Vince McMahon doesn’t like them. It’s harder to draw heat with this kind of booking and it is a risk all around.

Another things that people haven’t considered is the fact that Goldberg returning to WWE is very likely a one-off appearance. The company can’t throw around Saudi money for Goldberg to appear on domestic shows. Therefore, nothing has been set in stone about him appearing for WWE in any other capacity except for on June 7th.

It isn’t even confirmed that Goldberg will be wrestling on the KSA show yet. The former WWE Universal Champion did ask “Who’s next?” following the announcement, but that doesn’t mean a match is guaranteed. If he does wrestle, Goldberg will probably be in a squash match. It seems that Rusev might have already started making waves in that department as well.

For the record, this rumor about Goldberg coming back to win the WWE Title from Kofi Kingston was started by a social media account that prides itself on sending out fake stories to throw people off. It is a shame that accounts exist that intentionally misleads fans because some people take it as serious reporting. However, we can confirm that WWE has no such plans for Goldberg’s time in Jeddah.