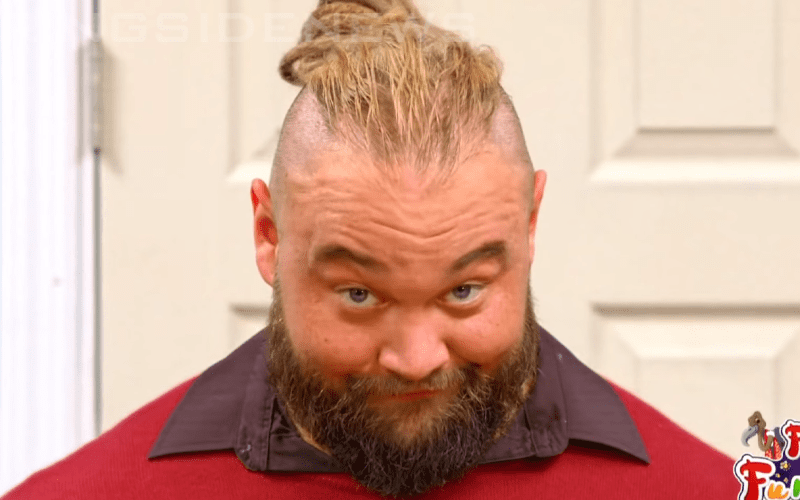 Bray Wyatt returned under a new gimmick last week and plenty of fans were immediately fascinated with what he was doing. The Firefly Fun House has a lot of possibilities and as we previously reported WWE brought in some talented people to work on those segments.

Firefly Fun House director Jason Baker appeared on the Wrestling Reality podcast where he said that he can’t wait for fans to see what’s next for the Eater Of World’s new persona.

“I cannot wait for the fans to see what comes next. I think it’s gonna catch some people off guard in a good way.”

There was apparently some kind of an issue with sponsors and stockholders who didn’t like the idea of a cult leader for children. However, WWE is obviously carrying through with this surprising new gimmick.

Baker went on to explain what it is like to work with Bray Wyatt on those segments. The creative juices were obviously flowing because they were able to pull out some very original content. Baker also had a chance to compare Wyatt to some very notable actors as well who have incredible range.

“Bray’s great man. He’s intense. He’s always thinking, and then he’s thinking past what he’s thinking. That man is… what’s that old saying? The razor’s edge between genius and insanity? And that man walks that razor’s edge constantly. Very, very smart. Smarter than a lot of people give him credit for. Great to collaborate with. You think you’re gonna throw an idea at him, he comes back with eight. You think you’re gonna hit him up with a piece of trivial knowledge, he’ll hit right back. He’ll see your trivial knowledge and then raise ya.”

“He is a unique, unique human being. Its been an absolute pleasure and an honor to get to collaborate with this gentleman — with someone who just puts such a thought process into his craft. I’ve had the opportunity of working on films with Russell Crowe and Tom Cruise, Will Smith and a bunch of other people working here in the Pittsburgh film industry and his mindset for his character development is on par with those guys. It’s a site to see. It’s something definitely to behold. I was thoroughly impressed with how much dedication he brings into his art and to his craft.”

Bray Wyatt’s Firefly Fun House character is only proving how good he is at character development. Wyatt has been able to take this new gimmick by the horns just like with his initial incarnation where he told people to follow the buzzards.

Therefore, it wouldn’t surprise us at all to see Bray Wyatt get some acting gigs out of these segments, especially with that glowing recommendation. Obviously, the Firefly Fun House is working because as of this writing, the YouTube video of the segment is sitting at 2.7 million views. So something is obviously working.