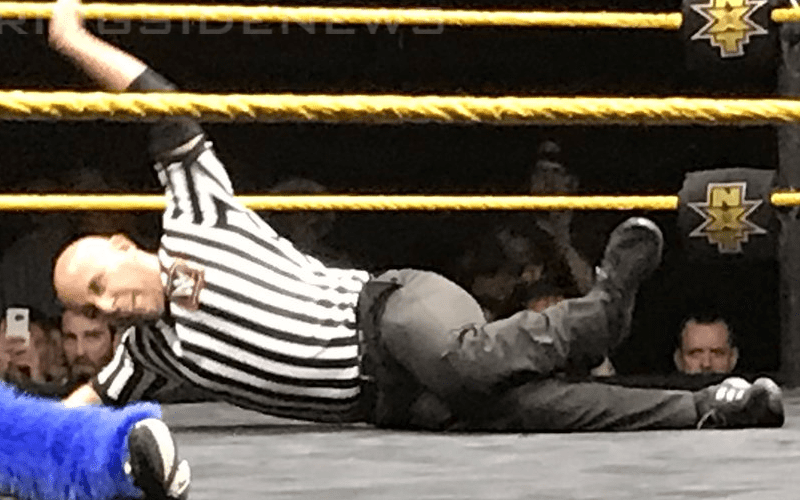 WWE can be a dangerous place to work and that includes referees. Tom Castor proved so much last night when he broke his leg during a match, but still completed the entire contest including counting to three.

As we previously reported, Tyler Breeze is working some NXT house shows. This was exciting for fans, but what they didn’t expect was for the referee to go down for the count in the process.

Breeze was facing the Velveteen Dream in a match that we would like to see. However, Tom Castor broke his leg in the process. He was obviously in terrible pain, but he completed the match as you can see from the footage below.

@tomcastorWWE is the epitome of professionalism and that was evident last night when he broke his leg during a match but didn’t let that interfere with his job. That man loves what he does. Speedy recovery, my man. The #wwenxt universe loves you.

Fellow NXT referee Drake Wuertz also commented on this unfortunate injury while asking fans to send out as much love as they can.

Please say a prayer for my brother @tomcastorWWE. He broke his leg in the line of duty tonight during the main event of #NXTOmaha. When he was on the stretcher he squeezed my hand and proudly said “Drake I Love the Business”. We love you Tom!

This was a pretty outstanding performance and just proves how the passion for this business runs all the way from the bottom to the top in NXT. Hopefully, Tom Castor will be okay and he can heal up quickly.