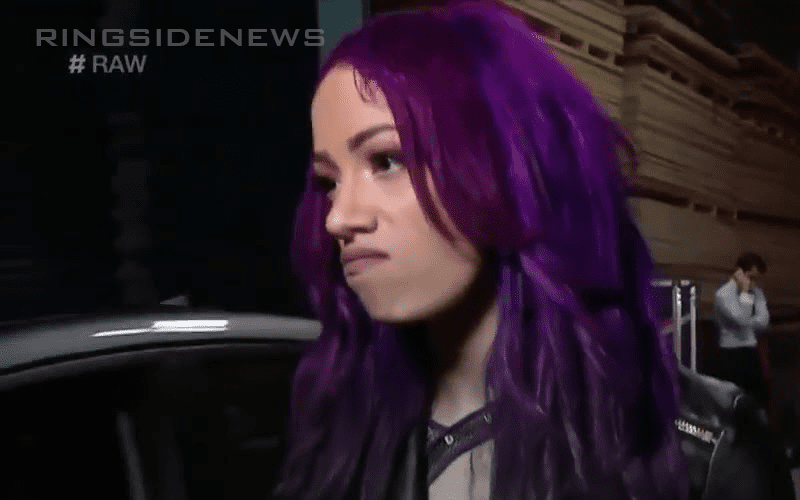 Sasha Banks told WWE that she wanted to quit at WrestleMania. Then she took off as the company hoped that her getting a little break would help change her mind.

Banks was frustrated at WWE’s creative decision of taking the Women’s Tag Team Titles off of her and Bayley. She was also upset about WWE splitting up her team with The Hugger. So she went home and since then Corey Graves has taken every shot he could at The Boss on commentary for leaving.

Dave Meltzer expanded on this situation during Wrestling Observer Radio where he said that things have not gotten any better. If anything, it might get pretty dirty soon enough if Banks and WWE’s relationship continues with a stalemate and the company won’t let her go. They could just keep extending her deal to never allow her a proper exit.

“Sasha Banks, the situation is unchanged. They are right now at a stalemate and the word — of course you know how this goes — but the word is that if she wants to sit out the rest of her contract she can sit out the rest of her contract. Of course, if you know what that means that means she’s going to be sitting out forever because they’re going to add time for her not working so kinda — these contracts are very very difficult.”

It was noted that Superstars can agree to a three-year contract which is an agreement not to go anywhere else for that amount of time. However, WWE can pretty much hold people against their will in a manner of speaking for as long as they like if they’re not working as they did with Neville.

The company is allowed to extend those contracts for time missed including injuries or in Sasha Banks’ instance she just wanted to quit. WWE wants Banks to come back, but Meltzer noted that if she isn’t announced for Money In The Bank by next week “then I’m going to guess she’s off the pay-per-view.”

It was noted that the only recent exception has been Dustin Rhodes. So it doesn’t look like anything is getting better between WWE and Sasha Banks. That also doesn’t mean they are going to let her leave anytime soon though.