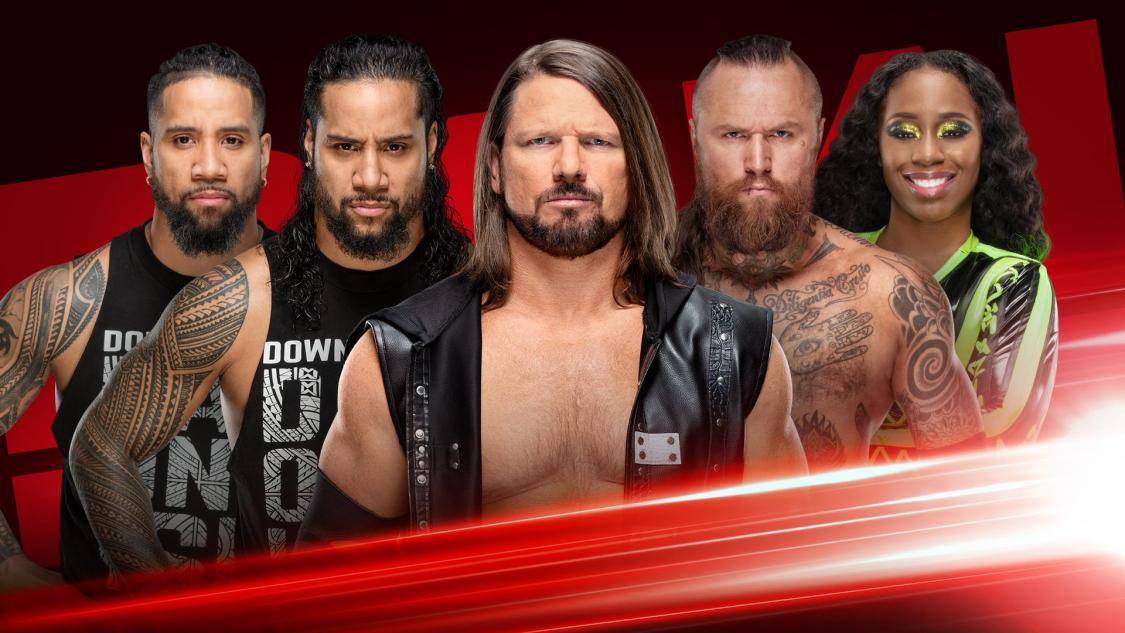 Tonight marks a new era for Monday Night Raw thanks to new signings from SmackDown; AJ Styles, Naomi, Eric Young, The Uso’s, Samoa Joe, and more. What feuds these stars move into is anyone’s guess but they should start to take shape tonight.

For the second week in a row WWE.com is teasing a new challenger emerging for Seth Rollins’ Universal Championship. We have no idea who that challenger is as of yet but chances are it will be Drew McIntyre.

The only other things to touch upon in the preview for tonight show is continued promo’s from Bray Wyatt’s puppets, Lacey Evans, and possible continuation of the Shane McMahon/Miz feud. Remember to follow us on Instagram and download the Ringside News app, and enjoy the show!

Monday Night Raw opens with The Game, Triple H, making his way to the ring. We learn that tonight there will be two Triple Threat matches, with the winners facing off for a Universal Championship opportunity at Money In The Bank on May 19th. The two matches are AJ Styles Vs. Rey Mysterio Vs. Samoa Joe, as well as Baron Corbin Vs. Drew McIntyre Vs. The Miz.

BOW DOWN TO THE KING!

Before Triple H can speak, Seth Rollins makes his way to the ring. Rollins comes to the ring and shakes Triple H’s hand. The Universal Champion garners a great reaction because he’s in his hometown. Rollins say this is surreal for him to be standing in the middle of this ring in his home state with the championship around his waist. Triple H nods then shakes his hand again. Seth says two weeks ago at WrestleMania he was in the fight of his life, but he slayed the beast and brought the title home. The fans start a “welcome home” chant.

Triple H says Rollins stomped that bucket head of Brock Lesnar into the mat – Rollins corrects him and says he did that three times. He came into WrestleMania as a Kingslayer and left a Beastslayer. Triple H says the landscape has changed. Rollins is the measuring stick as the champion. The whole world is gunning for him. Rollins says he understands that and knows Money in the Bank is right around the corner. If anyone knows a thing or two about the Money in the Bank contract, it’s him. Rollins reminds us that successfully cashed in and changed his career, but he’s also had it cashed in on him. However he will never let that happen again.

Triple H tells Seth to not put the cart before the horse because he has a laundry list of challengers. He needn’t worry about people cashing-in yet, he should be worried about who he’ll be defending the Universal Championship against that night. Rollins asks if Paul Heyman has been blowing up his phone for a rematch. Triple H says he hasn’t head from Heyman. Rollins asks what is next. Triple H says we’ll figure that out tonight. The best of the best have landed on RAW. There will be two triple threat matches with the winners fighting in the main event tonight. The winner of that match will face Rollins for the Universal Championship at Money in the Bank.

WWE United States Champion Samoa Joe makes his entrance and says he has arrived on RAW. Joe gets in the ring and says Becky Lynch has come up with a real interesting concept for two championships. His shoulders are wide and has room for one more. That next title will be Rollins’.

Rey Mysterio’s music hits, and he says Joe isn’t the only former Smackdown superstar looking to make an impact on RAW. Mysterio isn’t on RAW to hang out and drop knowledge. Mysterio has a match in mind. When all is said and done, at Money in the Bank he sees Rollins versus Mysterio.

Drew McIntyre’s music now hits, and he says he doesn’t give a damn what everyone in the ring thinks. McIntyre has spent a year cleaning this place up and had zero title opportunities. It is now his time. McIntyre says the only reason Rollins is Universal Champion is because he got to Brock Lesnar before he did. McIntyre will win the triple threat tonight, go to Money in the Bank, beat Rollins, and finally be Universal Champion.

“The only reason you’re #UniversalChampion is that you got to @BrockLesnar before ME.” @DMcIntyreWWE wants a piece of @WWERollins as well… #RAW pic.twitter.com/JVI0VLYOoN

The Miz makes his entrance and says the A-lister is back on RAW. That gets a good reception. Miz says the more things change, the more they stay the same. Rollins once again has something Miz wants. Miz has a movie reboot of sorts. These past few months have shown him that he can be a certain man. That’s a man worthy of the Universal Championship. There isn’t a more must see match at Money in the Bank than Seth Rollins versus The Miz.

Unsurprisingly, Baron Corbin comes out next and says he is the most deserving champion to face Rollins. Rollins may have slayed a beast at WrestleMania, but he retired a legend. Corbin asks if anyone else in the ring has defeated a Gold Medalist in his farewell match at WrestleMania.

And finally, AJ Styles’ music hits. Styles gets in the ring, and an “AJ Styles” chant picks up – he’s easily the most over challenger. Styles asks if Corbin ever shuts up. Corbin’s face is almost as annoying as his voice. Speaking of annoying, it seems like everyone in this ring has forgotten that AJ Styles is on RAW. AJ says he’ll win his triple threat match tonight. Then he’ll face whoever wins the next triple threat match. Then everyone will find out why Smackdown was the house that AJ Styles built. He’s going to give RAW what they always wanted. At Money in the Bank, it’ll be Seth Rollins versus AJ Styles for the Universal Championship.

Rollins looks at Triple H and says this is what he was talking about with everyone gunning for him. Rollins says he’s ready. It doesn’t matter which of them he faces at Money in the Bank. In case they forgot, he’s Seth Freakin’ Rollins, and he’s going to burn it down! The first of the two triple threats will be next!

We can’t talk about the #UniversalTitle championship picture without THIS MAN! #RAW @AJStylesOrg pic.twitter.com/zUNyfdUxkK

We come back just Joe quickly takes both men down, but Mysterio comes back with an enzuigiri on him. Styles attacks Mysterio from behind and viciously whips him into the corner. Styles hits a running clothesline in the corner. Mysterio runs at AJ who catapults him over his head and Mysterio catches Joe with a hurricanrana! Awesome. Joe rolls out of the ring to recover.

Styles and Mysterio come face to face and the fans get excited. Mysterio punches away at him, but he has a whip reversed. Mysterio slides through the legs, but Styles counters him with a backbreaker. Styles goes to the apron and hits a sliding knee to the face of Samoa Joe. Styles hits a snap suplex on Mysterio before hitting another backbreaker for a near fall. Styles grabs Rey for a Styles Clash but Mysterio escapes and rolls out of the ring.

Styles goes outside and attacks Joe before getting Mysterio back in the ring. Styles goes for a Styles Clash on Mysterio, but Mysterio counters into a hurricanrana. Joe quickly breaks up the pin. Joe attacks both men before eliminating Styles with a nasty back elbow. Joe punches away at Mysterio in the corner before sliding him out of the ring sternum first. Styles fires back but Joe catches him with a huge uranage for a near fall. The match continues after the break.

We return to see Samoa Joe catch Rey with a rapid scoop slam for a two count. Styles returns to the fray and hits Joe with a strike combo. Joe comes back with a few strikes but Styles takes him out with a step-up enzuigiri. Mysterio quickly breaks up the pin before kicking AJ in the face. Mysterio connects with a wheelbarrow bulldog on Styles before putting Joe in position. Mysterio goes for a 619, but Joe gets out of the ring.

Mysterio takes him out with a corkscrew plancha over the ropes! Mysterio goes to the top rope, but Styles cuts him off. They tease a superplex to the floor, but neither go. Joe then climbs the ropes and takes them both out with a double superplex! The crowd chants, “This is awesome.” Joe covers both for a near fall.

We come back from the break to see Joe hit Styles with a huge clothesline for a near fall! Mysterio takes Joe down with a springboard seated senton before hitting a gnarly crucifix slam. Styles breaks up the pin. Styles sends Mysterio into the corner, but Mysterio catches him with a head-scissor that takes Styles out of the ring.

Mysterio then counters a Joe powerslam with a tornado DDT. Mysterio goes for a 619, but Joe counters into a Coquina Clutch. Styles breaks it up, so Joe applies a Coquina Clutch to him. Styles counters into a pin, but Joe kicks out. Styles then hits an Pele kick to Joe. Mysterio hits a hurricanrana on Joe, then Styles that sends them both onto the middles ropes. Mysterio hits Joe with the 619, then goes for a springboard hurricanrana to AJ, but Styles counters into a powerbomb. Styles follows up with another powerbomb onto Joe! Styles then hits Mysterio with a Styles Clash onto Joe before pinning Joe for the win!

That was awesome. We see a video of John Cena hosting Ellen last week. Naomi makes her way to the ring, she’ll face Billie Kay after the break.

We return and The IIconics make their entrance. Billie Kay says what Naomi did last week can be summed up in one sentence: “Thank you, next”. They then make some unfunny reference to Ariana Grande. The IIconics ask who has Naomi’s back now that Bayley is on SmackDown Live. The IIconics says they are the future, and that future will be…you get it.

The match begins and Kay quickly kicks her down and covers for a no count. Kay immediately goes to a rest hold. Naomi fights up and clotheslines her down. Naomi hits a back elbow and knocks Royce off the apron. Naomi then catches Kay with a sunset flip for the surprise win.

We get another promo for Bray Wyatt with the dollhouse and the laughing doll.

The Miz makes his way for the second triple threat match.