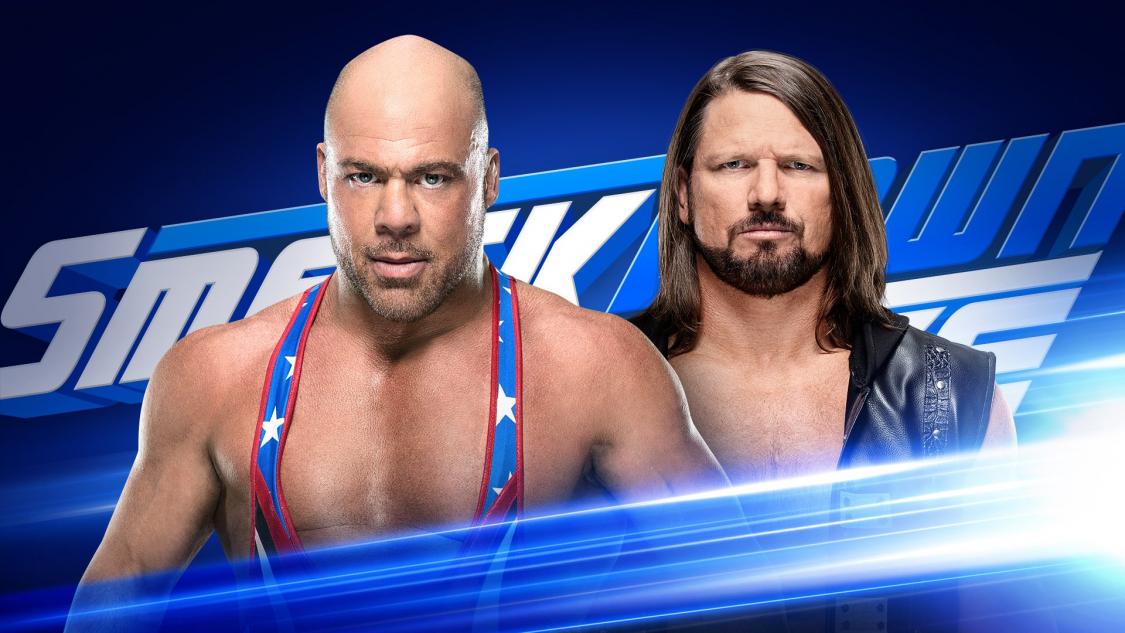 Welcome to Ringside News’ SmackDown Live results. Please keep refreshing this page throughout the show for constant updates. Everything will kick off at 8:00 PM EST.

SmackDown will be a loaded show this week. We know what AJ Styles will face Kurt Angle on the WWE Hall Of Famer’s farewell tour. This match is following last night’s encounter against Samoa Joe that took Angle to his limit. You have to wonder why Angle is wrestling so much, but he is getting to pick his opponents.

Kofi Kingston is also advertised for a WWE Title match at WrestleMania. Therefore, we very well might see the piece of the puzzle that is missing tonight on SmackDown Live. Kofi dismissed this as McMahon messing with him again so we will have to wait and see what storyline device they have in store.

Asuka also needs a WrestleMania opponent. Mandy Rose vs Sonya Deville vs Carmella vs Naomi is slated to be on the show tonight. The winner of that match will face Asuka at the show of shows. Let’s see if WWE keeps this a singles match or if Asuka will just have to face everyone in the match. We now have new information saying that match could be changed.

We can also probably expect to hear more about Shane McMahon and The Miz’s feud as they roll into WrestleMania.

All that and more is expected for SmackDown Live tonight. Remember to check back at 8:00 PM after the show kicks off for constant updates!

Kofi Kingston and the New Day came out with their pancakes and the announce team teased them leaving WWE.

The New Day thanked the fans for one hell of an experience and acted like they were quitting. Big E said that Woods and he spoke and they have discussed walking away from WWE.

Kofi remained silent as he stood between them. Woods said watching how poorly Kofi has been treated has been hard and it’s lasted for 11 years. Big E hyped Kofi again as Kingston remained silent.

Woods said they don’t know what they’re doing until they get answers. The man who knows this is Mr. McMahon. Then they asked McMahon to come out and speak to them about the issues they’ve had and they had no problem waiting until he came out.

Daniel Bryan walked out before Vince could say anything and he told McMahon not to waste another breathe and to let the New Day quit.

Bryan continued to rail on The New Day and told Vince to bring up 3 NXT Superstars and call them “Fresh Afternoon” and they would throw waffles in the crowd and everyone would love it.

Woods said that Bryan turned into a hypocrite and Vince told them all to shut up. Vince taunted the New Day for teasing quitting and he made fun of them. He said that the New Day were never going to quit. He also told Kofi that he is a B plus player and the only question is if Woods and Big E are a B plus tag team.

Then McMahon asked if Big E and Woods could put Kofi in Mania. Then he booked a tag team gauntlet match for Big E and Woods. If they win then Kofi is in the WWE Title match at WrestleMania.

Becky Lynch cut a backstage promo asking what Charlotte Flair brings to the WrestleMania title match before Flair came out and said that she’s about to show them how undeserving she is to be in the Mania main event. Woooo!

This match was for the SmackDown Women’s Championship. The crowd was pretty stunned.

Asuka and Charlotte wrestled around for a bit until Asuka latched on a headlock for a bit and then she caught Flair with a stiff kick to the stomach as Flair was trying to avoid an onslaught off an Irish whip.

The action was eventually taken outside where Asuka gained the upperhand, but Charlotte Flair came back with a boot and a knee to the back of the head.

Flair put the boots to Asuka and then the SmackDown Women’s Champ came back with a double knees. They slapped each other around and then Asuka started to let loose on Flair.

Flair maintained control and missed a moonsault. Asuka got on the Asukalock and then she landed a spin kick for a two count.

Charlotte maintained control and Asuka blocked a Figure 8 time and time again. Then Asuka landed a sick kick to the head and got a close two count. Asuka climbed up top and Flair landed a forearm.

Then Asuka blocked a Figure 8 and tried to get a submission. However, Flair got on the Figure 8 and Asuka tapped out.

After the match, Charlotte Flair left as champion and the crowd was excited to see it happen, but it was also very surprising to say the least.