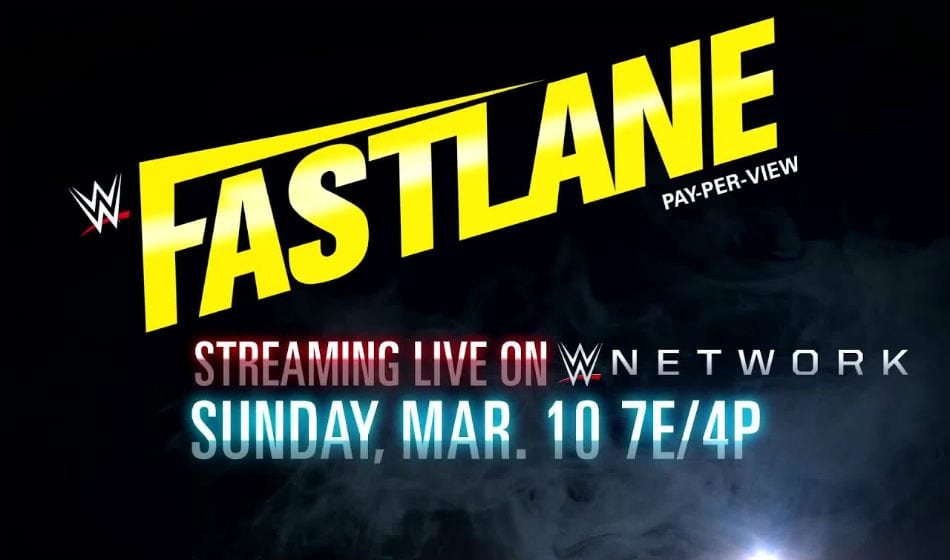 Welcome to Ringside News’ coverage of WWE Fastlane, the final stop on the road to WrestleMania.

Tonight’s show is headlined by, presumably, Becky Lynch Vs. Charlotte Flair. If Becky wins she is inserted into the Raw Women’s Championship match at WrestleMania, but if she loses she’s “gone”. So I guess WWE will murder her. Anywho, we can all safely assume that Becky will win this match or some foul play will occur, either way we know we’re getting that Triple threat.

Elsewhere tonight, and perhaps this is the main event, The Shield reunites one last time on PPV to face Drew McIntyre, Baron Corbin, and Bobby Lashley. As rushed as this reunion has been, I don’t think anyone really cares because it’s great to have Roman Reigns back and we’d all love to see The Hounds of Justice one last time…if Ambrose does indeed leave after WrestleMania.

Then there’s the match that probably should be the main event, Daniel Bryan Vs. Kevin Owens for the WWE Championship. Of course, this was originally Kofi Kingston’s spot but now Stone Cold… I mean Kevin Owens is back and we’re getting this match. It seems Kofi will still be Bryan’s WrestleMania opponent, so who knows how this one goes and what happens to Owens moving forward.

And that’s the preview for Fastlane. Be sure to follow us on Instagram and download the Ringside News app to be part of the conversation, and enjoy the show!

The panel hype the WWE Network and give a quick rundown of the Fastlane card.

We see a video of Becky Lynch’s journey to WrestleMania. Coach asks Beth what Becky has to accomplish tonight, to which Phoenix says Lynch has nothing to lose. This is her chance to cement her place in history and win gold. She’s faced tremendous all odds but she’s hungrier than anyone’s Beth ever seen. Sam Roberts says that’s nonsense, because Lynch has everything to lose. Sam points out that Becky is entitled to her WrestleMania match because she won the Royal Rumble. Otunga says Becky shouldn’t have signed the agreement on Raw this past week but he understands why she did it, and her dreams could get crushed just like her knee.

Sticking with the ladies, the panel discuss the Women’s Tag Team Champions, Sasha Banks and Bayley. Before they can really talk, Billie Kay and Peyton Royce walk in. They say they’ve been searching for Sasha and Bayley but haven’t been able to find them. Coach says would Billie and Peyton call-out Nia and Tamina if they won tonight, to which they say they don’t need to answer that. Coach says it would be in their best interest if Boss N’ Hug won tonight, to which they get mad and call him a “foolish man”.

Kayla Braxton is backstage with Sonya Deville and Mandy Rose, and she asks if Mandy is worried she has just made Asuka mad. Rose says Asuka picked a problem with them and Asuka is the longshot to win. Deville says this is the biggest night of Mandy’s career and she’s in Asuka’s head. EC3 then walks up and he introduces himself to Mandy Rose. He says he’s a hot commodity, something Mandy would understand. Deville then gets in EC3’s face and says Mandy wasn’t put on this Earth to date a human tanning bed. She tells him to take a hike and he does so.

We see a video from earlier today in which Carmella is backstage getting signatures for R-Truth to get a rematch for the United States Championship. Zelina Vega appears and begins arguing with her about who deserves the shot between Truth and Andrade. Samoa Joe walks up to them and tells them to stop arguing, because he will happily choke out anyone and everyone who wants to challenge him. He then signs Carmella’s petition and walks off. So tonight, seemingly on the main card, we’re getting Samoa Joe Vs. R-Truth Vs. Andrade Vs. Rey Mysterio for the United States Championship!

Joining the panel is none other than the birdman and former World Champion, Christian. Captain Charisma puts himself over before discussing The Miz’s homecoming in Cleveland tonight. He says this is a distraction The Miz doesn’t need, and also says The Miz’s dad is proof of why Miz is so annoying. Sam Roberts asks why the almost 40-year old Miz is seeking approval from everyone. Christian says he knows a lot about chemistry and The Uso’s have had it since being in the womb.

We get a selfie promo from Ricochet and Aleister Black, and Ricochet’s part was God awful. They read some scripted lines about flying high and fading to black.

A replay is shown of last week’s contract signing on SmackDown Live, when Vince came out and replaced Kofi Kingston with Kevin Owens in the main event. AJ Styles has joined Coach, Sam, and Christian on the panel to discuss this huge match. Coach asks how AJ feels about what happened Kofi. Styles says we all say what Kofi did to get the match, he earned it, and it’s been mistakenly taken away. Sam Roberts asks what happened to Styles, saying he’s gone from defending the title to talking about it. AJ says that you can’t always be on top and it’s not his time. Christian asks if Randy Orton is getting into AJ’s head, to which Styles says he’s been doing this long enough not to let things get to him. So he’ll deal with Orton when necessary.

Kayla Braxton is backstage with Kevin Owens, and she asks how he can stay focused. Owens starts by saying Vince is responsible for putting him in this spot, and Kofi deserves it, but he’s not going to turn this offer down. He says he’s been angry about Daniel Bryan for five months, and tonight he’s going to punch him in the face. The New Day walk up to Owens and Kofi says there are no hard feelings, that tonight is Kevin’s night. He tells him to go out there and beat Bryan, and Owens thanks him for it, saying it means a lot. They start walking off but a stage hand approaches and requests Kofi comes to their office to discuss the WWE Championship match.

We start with Woods and Nakamura. They lock-up and Shinsuke whips Woods to the corner. Woods fires back with a headscissors takedown for a two count.

Nakamura floors Woods with a big kick before tagging Rusev. We get a commercial break and come back to see Nakamura stomping Woods in the corner. Rusev comes back in and unloads on Woods in the corner. Rusev grabs Woods with a bear hug but the fans rally and Xavier fights out. Nakamura is back in and connects with a kick to the back of the head for a near-fall.

We cut backstage to see Miz and his dad. Miz says their match with The Uso’s is opening the show tonight. Shane walks in and they small-talk. Back with the match, Rusev lifts Woods onto the top turnbuckle but he gets kicked away. Woods then connects with a missile dropkick and tags Big E.

Big E storms the ring with belly-to-belly suplexes to now-legal Nakamura. Big E connects with a running splash, then lifts Nakamura for the Big Ending but Shinsuke reverses into a guillotine. Big E powers out and tosses Nakamura off. Big E looked for a suicide dive through the ropes but Nakamura kicked him before he could fly.

Nakamura takes to the top rope and hits a flying knee for a near-fall. Woods makes a tag while Nakamura attacks Big E. Woods then comes in with a spinning DDT to Nakamura, then Rusev tags in and hits a big kick to Woods for a near-fall. Rusev hit Woods with a German suplex before tagging Nakamura. They hit a double team suplex, followed by a knee from Nakamura for another near-fall. Nakamura looks for Kinshasha but Woods avoids it and tags Big E. They hit an STO/backbreaker, but then Lana crotches Woods on the ropes. The distraction allows Nakamura to connect with a kick, then Rusev hits a Machka Kick but Woods breaks the pin.

Woods returns and knocks them both from the ring, followed by a tope…but he’s caught in mid-air by Nakamura and Rusev, who then slam him down. Rusev gets Woods back inside for a near-fall. Rusev locks-in The Accolade, meanwhile Big E throws Nakamura into the timekeepers area. Rusev lets go due to the action on the outside, allowing Big E and Woods to catch him with the Up Up Down Down for the win!

Back with the panel for one last rundown of the Fastlane card, and they discuss The Shield reunion. Christian says Reigns’ return from cancer is one of the best stories in WWE and sports in general. Sam Roberts calls the reunion “stupid” but Coach says it’s a feel-good story. They quickly make some predictions; Christian thinks Charlotte will beat Becky Lynch; Otunga thinks Ricochet & Aleister Black will win the Raw Tag Team Championship; Roberts says The Uso’s will retain their Tag Titles; Christian reckons Asuka will dismantle Mandy Rose; Roberts says Joe will have a hard time retaining in the Fatal 4-Way for the US Championship; and Christian thinks Tamina and Nia Jax will win the Women’s Tag Team Championships.

That’s it for the Kick-Off Show. Head to the next page for the official start of Fastlane!