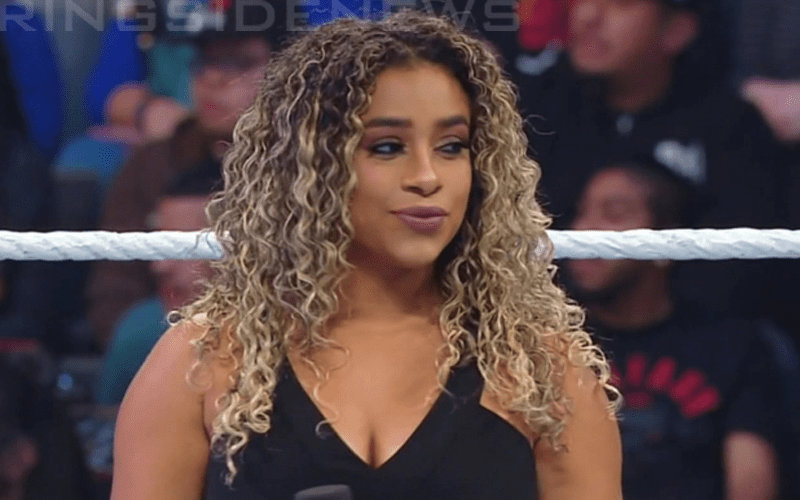 WWE ring announcer JoJo Offerman’s voice has been missed from WWE programming in recent months. She gave no notice or explanation of her departure and she has been silent on social media since Christmas.

JoJo’s official website’s Twitter account has been active though. They recently addressed some of the people who keep asking where JoJo Offerman has been with a couple of tweets. They also made it very clear that trolling will not be tolerated.

For everyone asking – JoJo isn’t done with WWE! She’ll be back at some point. But for now, @MikeRomeWWE is doing an impeccable job and keeping her spot warm!

Just a quick disclaimer to all that have messaged us, we won’t be giving out the details as to why JoJo isn’t currently on TV. It’s completely private and her privacy should stay that way. All there is to know is that it is a personal reason and she will eventually be back

We try not to respond back to negative responses and keep it positive but we will absolutely NOT have JoJo’s name constantly dragged through the mud for no reason other than the fact people believe in false claims and dirt sheets. It’s unhealthy to stay that hateful.

From now onwards, all Negative responses will be ignored and simply blocked. much more important issues going on in the world like Global Warming and the over usage of Plastics! Save the Turtles and stay out of business that doesn’t concern you! 🐢

We have heard some rumors why JoJo Offerman is not on television, but we were unable to confirm any of them. Needless to say, there are many stories swirling around on the IWC concerning JoJo. Her boyfriend Bray Wyat has also been absent from WWE television for months as well.

It sounds like JoJo will be back on WWE television when the time is right, but she is dealing with a personal issue and that is all that has been confirmed.