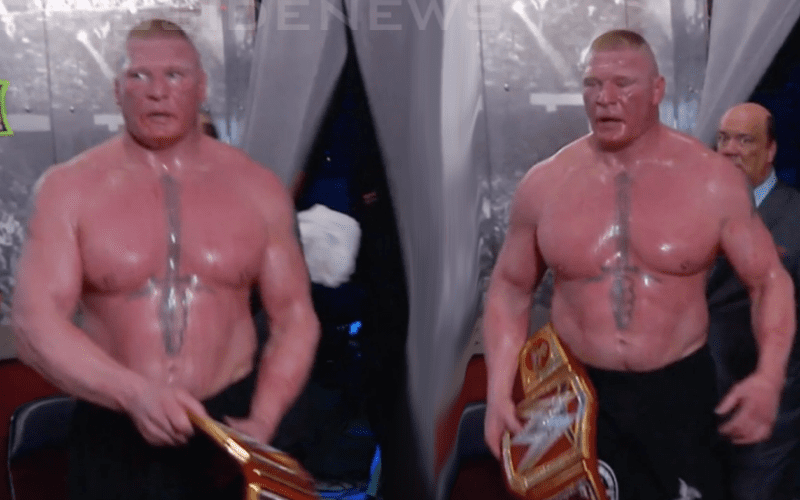 Brock Lesnar gets a lot of special treatment from everyone he deals with because he is Brock Lesnar. This mindset made it especially controversial when Lesnar heaved the Universal Title at Vince McMahon following his WrestleMania match last year.

A lot of people wondered why Brock Lesnar would have tossed his title at Vince McMahon which was followed by The Chairman calling Lesnar an “asshole.” After all, at the time Lesnar was teasing another UFC run.

Dave Meltzer was asked during Wrestling Observer Radio why Lesnar would have done this. There are two possible reasons and none of them have anything to do with being fed up with the company.

“Either one of two things. Either Vince and Brock were working everyone because everyone was furous — or Brock was just gonna show that he’s Brock and he’s the alpha and nobody else is. It could be either of those two, because if it was Vince and Brock working everyone and Vince isn’t gonna tell them, the way it went down. I mean, my impression was that it was perhaps that work thing that I said, but nobody else believes that because they believe that it was just Brock and he can do whatever he wants and because he’s Brock he can get away with it and in real like that’s the situatoin.”

We might never know what the real intentions of this happening in the Gorilla Position were. It is likely that only Vince McMahon, Brock Lesnar, and Paul Heyman were the only three people smartened up about it if this was a work. Either way, it certainly got a lot of people talking about Brock Lesnar’s WWE status.