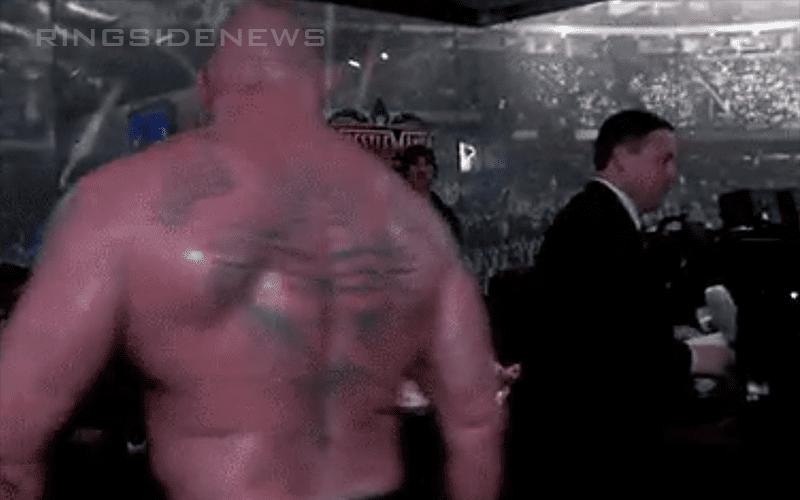 During the ongoing WWE 24 special, footage was shown of Brock Lesnar throwing the Universal Championship at Vince McMahon following his main event match against Roman Reigns at WrestleMania 34.

The episode of 24 is showcasing last year’s WrestleMania, as is always the case immediately after the Royal Rumble. While they usually kick things off with a nice montage, this time, they took a very different approach.

It’s no secret that Lesnar vs Reigns 2 in New Orleans wasn’t particularly well received, with many fans feeling quite confused and underwhelmed at the ending. Apparently, Brock seemed to feel the same way.

As you can see in the above clip, Lesnar comes through the Gorilla Position and launches the title at Vince. In response, the chairman appeared to swear at Lesnar.

While they clearly worked things out as Brock is still with the company and is once again the champion, it’s interesting to note that WWE have openly confirmed the rumours. Some will argue that it’s fake or scripted in this instance, but there certainly seemed to be a genuine animosity between the two.

The 24 specials always reveal some interesting behind the scenes details about life in WWE, to the point where it leaves fans wondering why they don’t do this kind of thing in their week to week storytelling. Still, it’s intriguing to see it play out, and it’ll be even more interesting to see if any more slices of information are revealed in the episode.

Brock seems set to take on Seth Rollins at WrestleMania 35 for the Universal Championship.