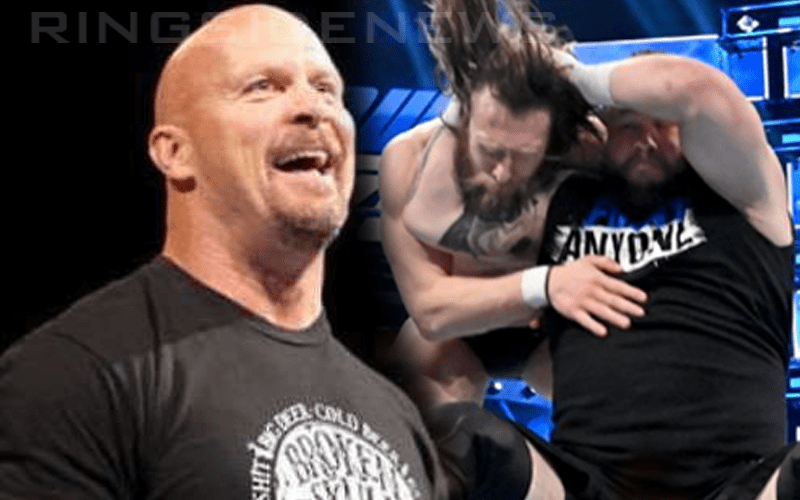 Many people have sold Steve Austin’s Stone Cold Stunner incredibly well and none of them is Vince McMahon. When Scott Hall took the Stunner at WrestleMania, he knew how to sell it. In fact, Hall’s sell-job inspired one fan to create a great video showing just how well he put over the move.

Kevin Owens is now using the Stunner as his finisher and Stone Cold already sent his word of approval. Now he is giving some hints by using a fan-made video showing Scott Hall getting blasted into orbit thanks to The Rattlesnake’s effective finisher.

Austin wrote to Kevin Owens along with posting an educational video:

This Stunner was a total shoot. I was happy @SCOTTHALLNWO was ok after this. Pay attention @FightOwensFight.

Kevin Owens had a great reply to Stone Cold’s joke on Twitter. KO said that he has a good idea how to beat people with the Stunner, but he might need some tips on how to shoot someone in outer space with the move.

I’ll keep studying this clip until then.

Kevin Owens’ character will be very interesting watch from this point on. He is hated as a heel mostly because he took Kofi Kingston’s spot at WWE Fastlane. After shooting weeks of babyface promos hyping his return, now Owens finds himself in a hot seat.

Only time will tell if WWE sticks with the angle that he’s doing it for his family or if WWE will turn Owens full heel in the process. Stone Cold is apparently around for advice so that has to help.