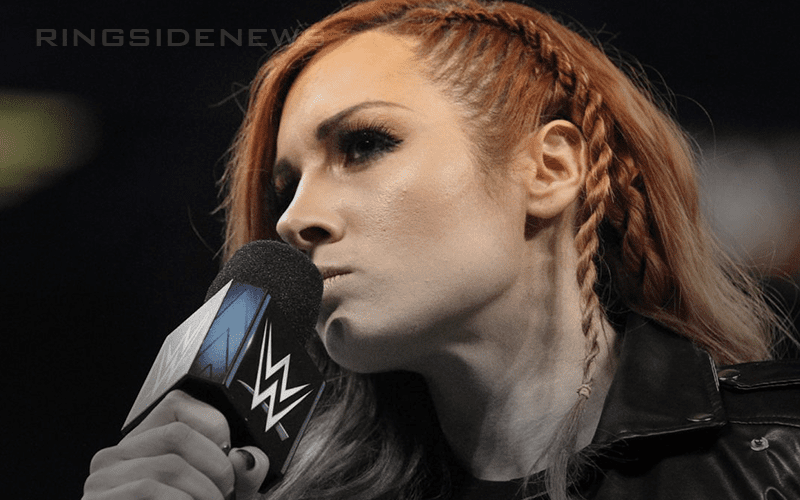 Becky Lynch didn’t make WWE’s latest swing up into Canada for a couple of shows. There were reports that she was legitimately injured, but that wasn’t the case at all. Lynch is just that good at working people. She kept a knee brace on and limped around to sell her storyline injury and missed some house shows because of it too. The biggest problem is that she was advertised for ose shows.

Dave Meltzer discussed this during Wrestling Observer Radio where WWE received some justified criticism for advertising Lynch and not delivering on The Man at all. Because they could have booked her to at least do something for the fans.

“I think that’s kinda bad they at least, especially with AJ not there and they advertised her. If nothing else they should have had her at the show cutting a promo.”

“It hurts RAW not to have Rollins, but for SmackDown not to have AJ and Becky Lynch who were both advertised and were probably you know on that roster right now I’d say the key people are Becky Lynch and Daniel Bryan and AJ Styles and Charlotte Flair. I think they’re the big four and to not have two of them on the show where Becky Lynch is clearly #1, maybe not on the house shows, but on TV she is for sure.”

“Not having two of them and they’re both advertised it’s one of those things — I think the modern fans are conditioned to know that what they advertise and what they deliver aren’t the same thing, but I still don’t find it to be a good policy. I can see not having her wrestle because it keeps the storyline consistent, but they should have had her on those shows just to cut a promo and maybe do an angle just let her deck somebody or something.”

Sometimes WWE doesn’t make much sense with how they book things. Not having Lynch appear due to a kayfabe injury is rather old-school, but it didn’t help all of those fans who wore The Man t-shirts hoping to see Lynch do something in Canada.