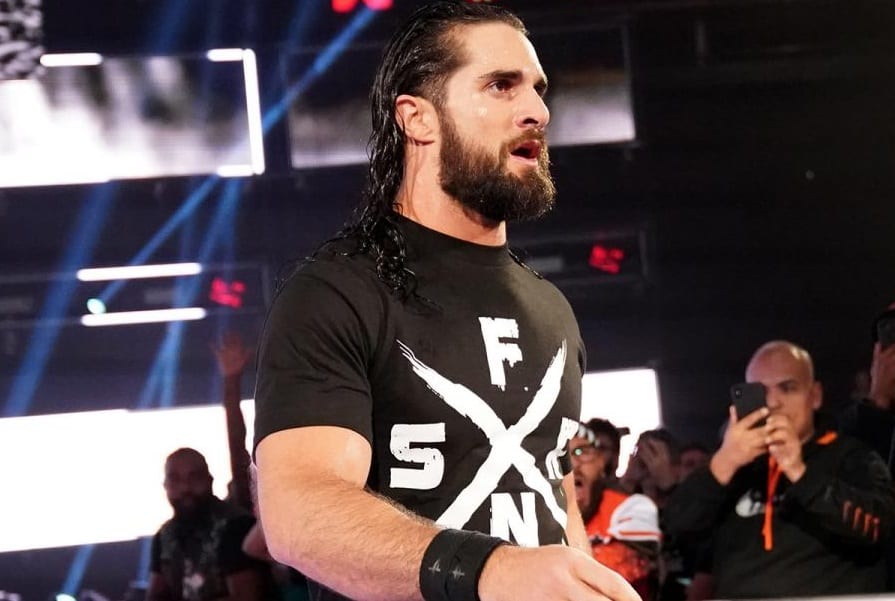 Seth Rollins came out to open RAW one night after winning the WWE Royal Rumble match. He was elated to get the opportunity of a WrestleMania main event match and relished the chance to point at the WrestleMania sign.

The Architect said he had two decisions on who he wants to face at WrestleMania. He could challenge Daniel Bryan for the WWE Title or take a trip to Suplex City and go after Brock Lesnar’s WWE Universal Title. Seth Rollins said he will have to think about it.

Then Triple H entered to make things very interesting. The Game reminded him how he begged The Architect to bring back Seth Rollins and then they got a little emotional over a shared dream.

Triple H said last night at the Royal Rumble “we found out who the one is and that one is Seth Freakin’ Rollins!”

Then he said Seth has a decision of who is he going to burn down at WrestleMania much like Becky Lynch has the same decision which she will make tomorrow night. In all reality, The Man made her decision about an hour later. Triple H said Rollins needs to make his decision tonight.

Both Daniel Bryan and Brock Lesnar were going to be there later in the night and Triple H said Rollins has to make a decision of “who’s you’re going to kick at WrestleMania.”

Then Dean Ambrose came out and told Seth that Triple H always tried to stop Rollins. This promo from Ambrose is much more interesting in retrospect considering how he told WWE that he is not sticking around after WrestleMania.

Triple H reminded Dean Ambrose that he stabbed Rollins in the back on the same night their other brother said he has leukemia again. Possibly, bringing up one of his best friends’ leukemia in a script handed to him was one of the biggest problems Ambrose had with WWE. This was followed by Dean and Triple H getting nose-to-nose over what concerns him.

Ambrose wanted a match against Rollins and called Triple H “chuckles” while demanding him to book the st. Ambrose asked Triple H if he had to ask permission from his father-in-law first and the crowd broke out in a loud “Yes he does!” chant.

Triple H called a referee to the ring and the two former Shield Brothers started their match which Rollins won with a Stomp.

Later on, it was time for Rollins to make a decision, but Brock Lesnar came down first interrupting Mike Rome’s introduction of Rollins.

Paul Heyman started to cut a promo and advised Seth to pick Daniel Bryan instead. Then Rollins ran down and got in Lesnar’s face. This resulted in a punch from Rollins, but four F5s from Lesnar. Then Lesnar put his Universal Title on the mat and performed a fifth F5 onto the title this time.

Lesnar’s point was certainly made. Then he went to leave, but Rollins beckoned Brock to come back so Lesnar hit another F5 before the show went off the air.

After the show concluded, Seth Rollins got on the microphone and made his announcement official. He will be challenging Brock Lesnar for the Universal Title at WrestleMania 35.